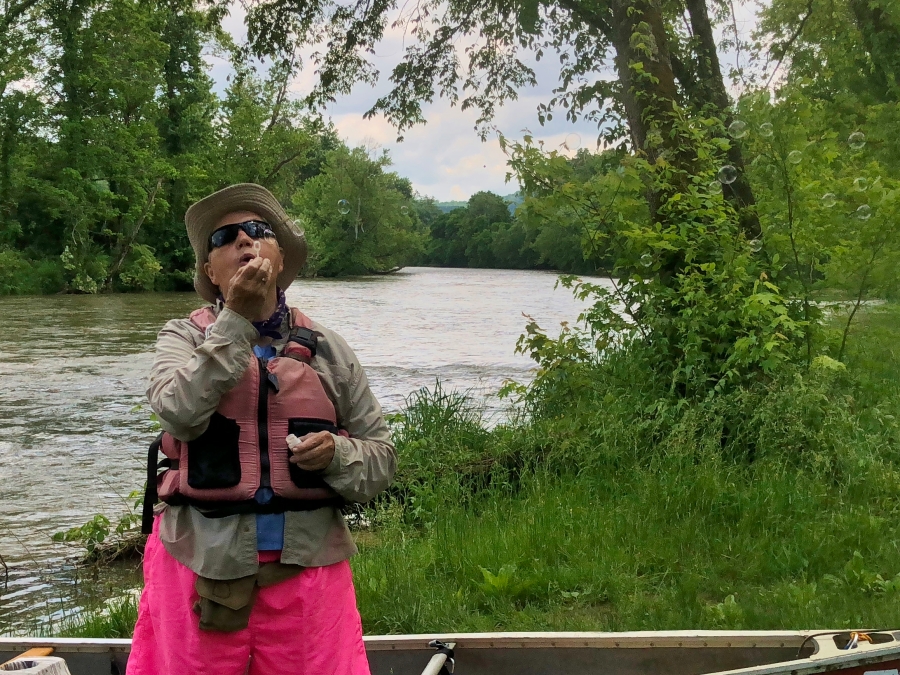 My friend Berta organized our first paddling adventure of the year on moving water. I had kayaked on flat water three times this spring, but was happy to finally take Huck on our favorite river, the Watauga. Several in our group had other obligations later in the day, so needed to make this a rather short trip.

Our original plan was to paddle the shorter stretch from Blevins Road to Wagner Road. However, when we looked at the generation schedule for the day, it looked as if the river would be running high and fast. LakeBum (Rob) and I agreed to do some recon when we reached Wagner Road, and decide whether we wanted to continue on to the take out a mile down river at the water treatment plant.

I arrived about fifteen minutes early and reported to Rob that the river was running fast enough that we could add on the extra mile. He agreed to meet me at the lower take out. In the meantime, I took advantage of the extra time to see if I could find a cache at the Wagner Road takeout that I had not found on a previous trip.

The caching gods were smiling on me today. As I climbed through the woods above the parking area, I spotted the ammo can from about 25 feet away. I quickly signed the log sheet and replaced the cache, hiding it a little better than I had found it so that muggles wouldn’t spot it.

I then decided to bushwhack over to the road and walk down it rather than try to make my way back down the wet, slippery slope I had climbed to get there. This proved harder than I thought because of thick vegetation including stinging nettle and briars. I finally emerged onto the road wet from both sweat and from being whacked by wet bushes.

I quickly drove to the take out point to meet Rob. We loaded my boat into his truck and drove to Blevins Road to meet the rest of the group.

In addition to Berta, our group included Rob’s brother Richard and a young friend named Reece. As is often the case, I was the only kayaker in the group. Rob and Berta were paddling solo canoes, with Richard and Reece pairing up in a tandem canoe.

Since this was Reece’s first canoe trip, Richard spent some time giving him some paddling instruction before we started. He was a quick study, and once in the boat looked very natural and relaxed. While they were going over the basic strokes, I wandered over to photograph a family of geese. The babies were so cute and fuzzy!

Once the lessons were over, we all launched our boats. I had Signal the Frog® attached to the front of my boat along with my waterproof video camera.

After we passed through the first set of rapids, Reece had a huge grin on his face signaling that he was having a great time. I don’t think I saw that grin disappear the whole trip. If anything, it got bigger.

Although we had just been on the river for about 45 minutes, we stopped at the halfway point where we typically have lunch. It was a good chance for a bathroom break and for those who had been kneeling (the canoeists) to stretch their legs.

It is always neat to introduce a new visitor to this stretch of the river, showing them some of our favorite spots like the boat that has rested halfway down a cliff for years. We noticed that it has broken up more over the winter, and is barely recognizable as a boat now.

When we went through Goat Rapid, I took the rare opportunity to go right through the middle. Typically, it is necessary to steer to the left to avoid the large rocks in the center of the river, but with the water so high, I could go right over them. This means I had a good sized drop, and plunged through a wave so high that it washed completely over me. It smacked me with enough force that I nearly had the breath knocked out of me, and about half of the water in the river rushed up through my nose, clearing my sinuses. It was great fun!

Reece was grinning even more broadly after they made it through. We pulled over to shore so that all of the canoes could be bailed out. I was happy for my skirt that kept the water out of my kayak. I was drenched from the waist up, but my seat was still nice and dry.

When we reached the final set of rapids before the Wagner Road boat ramp, Rob asked if I would go ahead of everyone else and take photos since I was the only one who had brought a camera. I was happy to. I ran the rapids, and immediately eddied out at river left. I pulled my kayak up onto the rocks, pointing it toward the rapids so that the camera attached to my bow would capture paddlers as they went past. I then stood on the rocks with my cell phone in one hand, shooting video, and my camera in my other to take photos.

For the second trip in a row, I was disappointed to see that Quarry Falls was not running. That is always a highlight of the trip. I did get to see a whole herd of baby calves, and even paddled over to take a picture of one.

The trip was soon over, and we exited the river. While we were gathering our gear, Berta suddenly remembered the bottle of bubbles in her life jacket’s pocket. I told her it wasn’t too late to blow a few, and I took her photo doing it. It was a fitting end to the day.

In addition to the photos posted below, I created a video of highlights from the trip. You can view it on my YouTube channel. 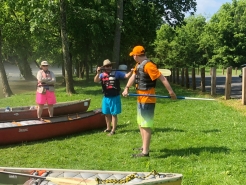 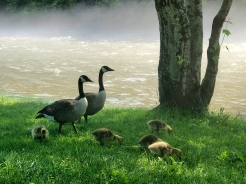 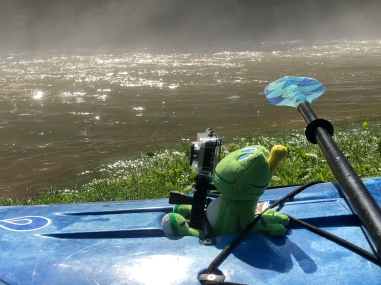