..first held in 2003 by JoGPS as a way to bring “geocachers from all over” together. JoGPS says it started as “all about the numbers” but continues as “all about the number of new friends you make and smiles you share.” In 2006, GeoWoodstock become the first Geocaching Mega Event, in the world! Since then, GeoWoodstock has been the paramount Mega Event of the year in North America. (from https://geowoodstock.us/)

Let’s start at the beginning. Last May I attended GeoWoodstock XV in Waynesville, NC. This was my first time to attend a Mega Event, and it was more than a little overwhelming, but loads of fun. When I heard that the organizers of GeoWoodstock XVI dreamed of this year’s event being a Giga Event, I knew I had to try to attend it as well.

Cincinnati, OH – the site for this year’s event – is within easy driving distance of my home in northeast Tennessee. I also have cousins who live there, so the thought of being able to visit them was an added bonus.

Deban agreed to go with me, so we made reservations at a local hotel for Friday and Saturday nights. Several other members of my local geocaching group, New Cache Order, were also planning to attend. I also hoped to be able to see friends I made on a geocaching cruise in 2013 who live in California, Canada and Puerto Rico.

Early on Friday morning, Deban, Signal the Frog® and I loaded up the car, kissed our pups goodbye, said “so long” to our mom and aunt, and hit the road. I had made Signal an NCO member shirt just for the occasion, so he was styling.

We first had to drive to the town of Rutledge, TN where Deban had work responsibilities. When we arrived in Rutledge, I dropped Deban off at the Justice Center where she was to meet with potential clients. She said that she would be there for 20 minutes. I told her I would go find some geocaches while I waited. Deban repeated, “I will ONLY be here 20 minutes.” I assured her that I understood that, and that I would be back to get her in 20 minutes.

I had downloaded caches in the Rutledge area to my phone the night before, and quickly made my way to the closest one, a park-n-grab at a stop sign. After finding it, I made my way to another cache in front of a church a few blocks away. My third cache required me to actually go inside a historic home that is a tourist center. The cache container here was filled with all kinds of swag provided by the center employees and local businesses.

After logging that cache, I found two additional park-n-grabs before returning to the Justice Center precisely 20 minutes after I had left. Deban looked a bit surprised that I was on time because she knows how consumed I can get with geocaching. She said, “Did you find anything?” “I found five!” I said.

She offered to drive as we left Rutledge, so that I could jump out and log additional caches along the highway out of town. I logged 10 more caches before I was outside the radius of caches I had saved on my phone. Since we were in a rural area without a strong cellular signal, I was unable to pull up more caches, so we decided to drive on toward Ohio.

We stopped in Harrogate, TN for lunch, and then our route took us through the Cumberland Gap Tunnel. The tunnel is a Virtual Cache. This is a type of cache where there is no physical log to sign, but for which you must answer questions to show that you visited. To log this virtual, you must count the number of exit stairs and fans within the tunnel.

As we exited the tunnel, we crossed from Tennessee to Kentucky and entered the town of Middlesboro. We stopped in the middle of town so that I could collect the answers needed to log an EarthCache. This EarthCache discusses the creation of the valley in which Middlesboro rests. The valley is actually a crater created from a meteor strike 300 million years ago.

After traveling a four lane highway for quite a while, we finally reached Interstate 75 and headed north. Along the way, we stopped off at an exit to log a special cache called Hey YO! NCO Heading to GWS! This was hidden by new members of New Cache Order in honor of the group, with a challenge that all group members heading to GeoWoodstock stop off and log it.

When we arrived at our hotel, just outside of Cincinnati in Wilder, KY, we checked in. I learned at the front desk that there had been a miscommunication about our reservation. For some reason, they thought that I required a room with two beds rather than the King room that I had reserved. Because they did not have any rooms with two beds available, the desk employee informed me that they were going to comp me a second room. This was welcome news, because I knew that a friend from home would like to attend the event but did not have a place to stay. I called her to let her know we now had an extra room, and she decided to leave right away for the five hour drive.

Deban and I ate dinner at Skyline Chili – a Cincinnati area chain. We learned years ago to eat Cincinnati style chili from a friend who grew up there – chili served over spaghetti noodles and topped with cheese. At Skyline Chili this is called a “three way” and it is delicious. Our server offered bibs when she brought our meals, and Deban gladly let her tie one around her neck as she often ends up wearing her meals.

After enjoying our meal, we drove into downtown Cincinnati so that Deban could spend some time there while I went geocaching with Coach_L42 (Thomas). He had done some research earlier and found the location of the oldest geocache in Ohio was about a 30 minute drive from down town.

We headed to Shawnee Lookout Park and reached the trail head at 7:20. We knew the park closed at dusk, so we decided to make the quick hike out to log this old cache, and bypass the many multi-caches along the trail. The distance to the cache was .6 miles and we made it in 11 minutes, which wasn’t bad considering it was mostly uphill. Along the way we saw other geocachers, some of whom were returning to parking, and others who were searching for the multis. As we neared the location of the cache we were hunting, we heard voices at GZ and arrived just as some other cachers were leaving.

The cache was hidden in February 2001, but was still in excellent condition. I took time to flip through the log book and found that it had been logged multiple times in the last few days. In fact, I took time to go back and count the online logs for this cache and found that it was logged over 400 times on the day I was there! It has actually been logged as found over 1200 times in the last week.

Since we had found it so quickly, we took time to visit the coordinates of an EarthCache just down the trail. We also stopped to find a cache near parking. Then, on the drive out of the park we found four more caches. One of these was named “Squeaky” and turned out to be a plastic mouse hidden in a log. When we started looking for the one named “Pssst” I remarked that it must be a snake. I was right.

We finally decided that it was getting too close to dark to stay in the park any longer. Besides, we wanted to go to an event about an hour away. By the time we arrived at the fair grounds where it was held, it was completely dark and they had not yet lit the bonfire, making it tough to navigate our way to GZ. We stayed for an hour or so, chatting with fellow NCO members SpongeBob Cache Pants (Kelly) and Bibleman Rick (Rick) fore calling it a night.

On Saturday morning, Deban drove me over to Coney Island for the GeoWoodstock event. Rudekoolaid (Angela) followed us. The parking lot was already packed and there were geocachers everywhere. Speakers had started presenting workshops on the main stage, and there were several pavilions and tents filled with vendors selling all manner of geocaching related items.

Deban lasted about 30 minutes before bailing out. Angela and I wandered around, and occasionally ran into other NCO members and cachers we knew. I was happy to see friends that I had made on a geocaching cruise in 2013. Two of them live in California, and four in Canada. We also made new friends along the way.

At one point, a man came up to me and introduced himself. He lives in Indiana, but has a hide in our area. He was happy to see me because I had helped him out several years ago by replacing his hide when it went missing.

We visited the Travel Bug tent and exchanged trackable items that we had brought with us. Everything was well organized with tubs marked for different regions of the United States and the world, depending on the goals of the travel bugs. I picked up several bugs that want to go to either Europe or the Pacific since I have upcoming trips to Norway and Hawaii.

Just when Angela and I decided to head back to the hotel, a light rain started. It actually felt good on this hot day, and we were happy it wasn’t the thunderstorms that had been predicted.

After a rest in our hotel room, Deban and I went back out to meet my cousin Maggie and her husband Mike for dinner. They live in Cincinnati and it had been nearly five years since I last saw Maggie. We had a delicious meal, followed by Graeter’s Ice Cream.

Back at the hotel, I met up with Angela and headed back out to find a few geocaches. We then went back to Coney Island for the Midnight Madness meetup where I traded Pathtags with 27 other geocachers.

After such a busy couple of days, I slept soundly that night. On Sunday morning, Deban and I headed for home. I even convinced her to make a couple of stops along the way so that I could log some more caches. This was a weekend I will never forget! 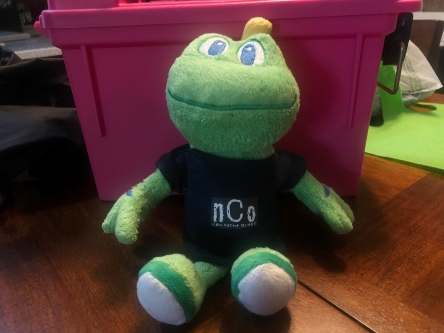 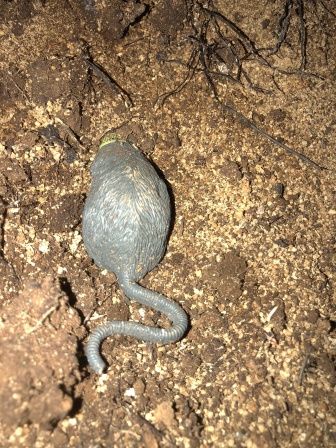 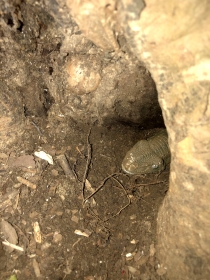 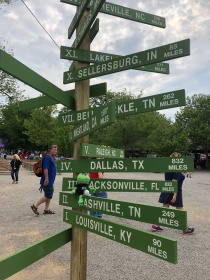 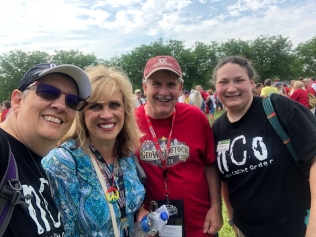 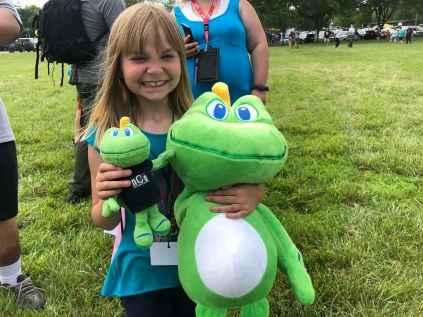 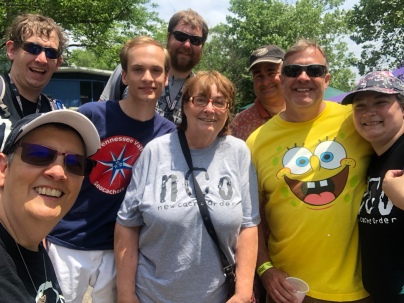 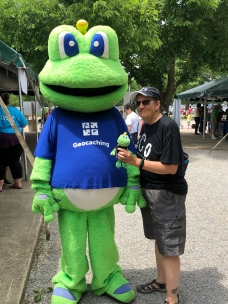