When I woke up to see snow on a Saturday morning, I knew I had to get out and play in it. I reached out to a couple of friends, and LakeBum (Rob) accepted my invitation to hike. We made plans to meet at the entrance of Bays Mountain park at 10:00 am, leave one vehicle at the bottom of the mountain in the Eastman Recreation area, and drive the other vehicle up to parking in Bays Mountain.

We began our hike by trekking up to the observation tower via the Cliffside Trail. I love the way a wet snow clings to the branches of trees in the forest, especially the evergreens. It was a beautiful sight, which made up for the climb up the many steps along this trail. There is also something about a blanket of snow that muffles the usual noise around us, which made it a peaceful climb. Even our footsteps were quieter without the crunch of leaves beneath our boots.

Once we reached the tower, we climbed to the top. My goal was to gather the information I needed to log a geocache that I first attempted five years ago. As a new cacher back then, I wasn’t experienced enough to use the info given me to locate the geocache. I had found all of the other caches on this side of the park, and that one blue frowny face on my geocaching map needed to be changed to a yellow smiley.

Fortunately, Rob and I know the park well enough to estimate the direction of the tower, and I took a compass bearing based on instinct. Later, when I read the hint for this geocache, I learned that the cache owner had helpfully included the correct bearing which was within five degrees of my estimate.

We spent a little time atop the tower taking photos and Signal the Frog and I made snow angels. We then descended and headed back down the trail the required distance and began searching for the geocache. There were so many places it could have been. The cache owner had provided a spoiler pic showing what the area looked like when he hid the cache, but that was ten years ago and the forest has a way of changing over the years. Couple that with a thick carpet of leaves, covered with snow, and this was a real challenge. Rob had found the cache three years ago, but did not remember anything about its placement. Finally, he poked the right pile of leaves and said, “Well, looky here!” I was happy to finally be able to sign the log sheet on this cache, avenging the DNF of five years earlier.

Because we had decided to take the road back down, we walked back up to the tower where the trail meets the road. As we approached, the sun began to peek through, and I suddenly noticed that visibility had drastically improved during the time we were looking for the cache. I decided I needed to climb the tower again to take more photos showing the difference in views from just a short time earlier.

We followed the road back down to parking, and then walked out to the mid-point of the dam. By this time there were blue skies with white puffy clouds overhead. Across the lake, the snow was still clinging to the evergreens making for a beautiful scene.

Next, we headed down the Dolan Gap trail. We had hiked this trail last December, logging all of the caches along it. However, shortly after our hike, Cache Cracker Jacks (Tom and Dori) had hiked it and hidden a new cache.

We stopped off at the footbridge just below the waterfall. I had brought my Nikon and tripod along hoping for some good photos of the waterfall in the snow. However, the water flow was so low that I didn’t even attempt to take any photos.

Fellow cachers Masked Llama (Tony) and Penguinsushi (Jared) had asked us to stop off at another cache to retrieve part of a travel bug that they had accidentally left behind on their last visit. We had visited this cache during last year’s hike, and did not relish the steep climb from the creek up to the cache site. However, we discovered a much easier route by continuing down the trail past the cache, crossing the creek on an old concrete foot bridge, and then following steps built into the hillside. These were apparently built years ago by Eastman when the trail was better maintained. From there, it was still a bit of a scramble through thorns and over downed trees, but much easier than our previous trip.

The cache we were revisiting is at the site of the remnants of an old American Chestnut tree. These trees were once the king of our forests, but when diseased trees were imported from Asia in the early 1900s, the disease spread. Nearly all of the chestnut trees were killed by this fungus by 1930. At some point in the 1980s a plague was erected here, marking the stump of one of those great trees.

After taking care of business at the remnant cache, we made our way back to the steps we had found earlier. Another set of steps took us up to a forest road that we followed until we were within about 300 feet of the second cache we wanted to find today. When Tom and Dori hid this cache, they made an instructional video on hiding geocaches which they later uploaded to YouTube. This gave the cache its name, “As Seen on YouTube.”

As we followed our the GPS on our phones through the woods, I decided to record my own video on how to find a geocache. Apparently, this jinxed us because once we were at the cache location, we could not find it! We searched and searched. We pulled up the video on YouTube and watched it to make certain we were searching the right pile of rocks (of which there were many). We searched some more. We moved to other rock piles and searched. Finally, I returned once again to the original pile and moved each rock one by one. We thought , based on the video, that we were searching for an ammo can and there were only so many spots in this rock pile that a cache of that size could have been hidden. Finally, I moved a rock and caught a glimpse of something – a pvc pipe with caps on each end, what we call a “dirty tube.” Obviously, the ammo can in the video was just a prop and not the actual cache container!

We happily signed the log, replaced the container and re-stacked the rocks. We then made our way back to the forest road and followed it down to my car.

After driving back up into Bays Mountain Park, we sat on Rob’s tail gate to eat our lunch. We then walked down to the animal habitats to meet a couple of new residents, Jamie the fox, and HiTwo the river otter. They both seem to be settling in to their new habitats well. HiTwo was really enjoying playing in the snow.

Out of the 161 caches in Bays Mountain and the adjoining Laurel Run Park, I still need to find 16 to completely fill in my map. Of course, new caches are added from time to time, so that number may grow. When and if I ever find all of the caches there, I will still have ample reason to return. This park is truly a jewel in Kingsport’s crown.

Path through the winter wonderland. 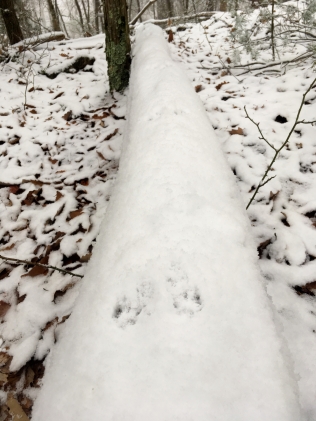 Some little varmit used this log as a path.

nCo is cool. Get it?

The view from the observation tower.

Two thumbs up for snow hiking. 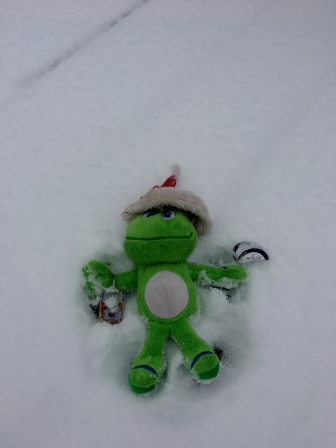 Signal wanted to get in on the snow angel fun.

What a difference 30 minutes makes.

My geocaching map of Bay’s Mountain.