Late on Saturday afternoon, LakeBum (Rob) and I decided to join a group in a hike to The Chimneys on Sunday. This is a spot high above Linville Gorge in North Carolina.

We met up with tncorgi (Mary) and Kaero (Kae) in the Dunkin Donuts parking lot at 8:00 am, and began the long drive to the trail head. The last few miles of this drive were on a gravel forest road which made me wish I was driving my truck instead of Deban’s Kia. It was a bumpy ride, but we finally made it.

We arrived at the trail head well ahead of the scheduled meeting time of 10:00 am. The rest of our group was late in arriving but the wait gave Mary time to make friends in the parking lot. One group of young people that she met told her that they were hiking out to a point where they have rigged up a slackline. She got directions from them so that we could find it during our hike. But, more on that later.

Once the rest of the group assembled, we were eleven strong – ten humans aged 6 – 65 and one canine. Our leader, wncsteph (Stephanie) headed up the trail with all of us in tow. The first part of our hike led us through a wooded camping area where we saw a few tents set up.

Soon, we emerged onto a rocky ridgeline and began picking our way across and between boulders. We had clear, blue skies above us, and could see for miles in all directions. Behind us was Table Rock.  The trail head for this hike leaves from the same parking lot we had just left. To our right we could see down into the gorge, and across to Linville Mountain and beyond. One member of our group pointed out that to our left we could even see the skyline of uptown Charlotte, NC in the distance!

We continued slowly along the ridgeline, taking time to absorb the beauty around us. The breeze was a little chilly, but everyone seemed comfortable in their layers of clothing. I soon shed my gloves and eventually swapped out my toboggan for a ball cap as the sun warmed the mountaintop.

Eventually, we approached a group of high rock formations, and our phones told us there was a geocache nearby that we needed to search for. Lob the Huntsman (Ray), wncsteph (Stephanie), Boootz (Marcia) and I climbed up to the first level to look for the cache. They found a spot that they felt matched the description, but my phone continued to insist that the cache was high atop the next set of rocks. This cache had not been found for over five years, so Ray had come prepared with a replacement container. They placed it in the spot they had found, but we agreed to see if there were a way to the top of the spot where my phone was pointing on our way back later in the day.

We rejoined the group and made our way along the trail to the end of the ridgeline. Along the way we passed a rock cairn marking the trail to the slack line, but decided to save that for later. We were eager to ascend to the top of the rocks where the closing scene of the movie “Last of the Mohicans” was filmed.

While Stephanie waited behind to make certain a straggler in the group knew the way to the top, the rest of us made our way up to a plateau overlooking the gorge, thinking it was “the” spot used in the movie. Once there, Mary tearfully shared with the group her story.

Twenty-five years ago, when the movie first hit the theaters, Mary saw it with her (now ex) husband. They were living in Texas at the time. She emerged from the theater in tears, vowing that someday she would visit that place where that last scene was filmed. It had taken her twenty-five years, but she was overcome with joy to have finally made it to this spot.

We enjoyed the views and took pictures of each other while waiting for Stephanie and tigercash (James). Once they arrived, Stephanie informed us that the movie location was higher up! We all made our way on up to the top of the rock formations and again took pictures. Signal the Frog even joined in the fun, posing at the edge of a rock overhang gazing into the gorge. Rob and I then declared it lunch time, and pulled out our sandwiches. Food was shared and enjoyed, and stories swapped. By this time, the weather had warmed enough for me to shed my jacket.

After lunch, we made our way back down to the trail, and then took the side trail down to the slackline. There we met a young couple and their dog who had just finished walking the slackline. We riddled them with questions which they politely answered. The young man explained that he first had to rappel to the bottom of the rocks on which we were standing, and then make his way across to a rock formation called the Camel. This takes about an hour. He then climbed the Camel, which took about two hours. From there he walked back across the slackline to a spot below where we were standing, and climbed back up to where he had begun.

I bravely, and very carefully, walked to the edge and looked down at the blue line strung between the cliff and rock outcropping. The line is about 200 feet long and over 100 feet high. Someone asked if the wind was a factor when you are walking it, and he said the wind was like having another person on the line with you. The sound of it is so loud, it is as if it is talking to you.

As we left, Ray said that he now understood why people look at him strangely and ask why he geocaches, because he was wondering why these people walk a slackline. You can see video of people slacklining in this same area of the gorge here.

We made our way back up to the main trail, and headed back toward the parking area. As we neared the area where the geocache was hidden that we had looked for previously, I shed my backpack and headed up a side trail that to me to the top of The Chimneys, expecting others to follow. I looked in several places that matched the description on the cache page, and found a spot that was only one foot from ground zero according to my phone’s GPS. Others in the group shouted from below to ask if I had found anything, and I reported back that I had not, but that I had found the spot where I felt certain the cache was supposed to be hidden.

Ray climbed up to join me, bringing along a replacement container which I tied to a bush and tucked into the hole that looked like it had most likely held the geocache. We then scrambled back down and followed the rest of the group back toward parking. Along the way, we stopped off to retrieve the other replacement container that they had hidden earlier, and I posed while Rob took more pictures.

Back on the trail, we spotted one more rock that just begged to be climbed, and Rob bravely scaled it for his chance to pose for photos. By this time, the rest of the group was out of sight, so we rushed to catch up to them.

As we descended the end of the trail to parking, I caught sight of Kae standing against my car waiting, with her right hand held high in the air. Suspecting the worst, I asked if she was okay and she admitted that she had slipped and thought she had sprained her wrist. Fortunately, I had put an ice pack in a cooler with some drinks that morning, and was able to dig an ace bandage out of my first aid kit. She used the bandage to strap the ice pack to her wrist, and when we left the trail head she rode in the back seat holding onto the “oh sh#t” handle above the door in order to keep it elevated.

We followed Stephanie off the mountain, and once on the main road began to see one vehicle after another with live Christmas trees tied to the top. It seemed that at least 50% of the vehicles I saw had been to pick up their trees. The other 50% were probably on their way to a tree farm.

Stephanie led us to Famous Louise’s Rockhouse Restaurant where the rest of the group had met that morning for breakfast. We logged the geocache hidden there, and then Rob, Mary, Kae and I went inside to enjoy a delicious Sunday afternoon meal. The three girls had the Sunday Special: Pot roast, whipped potatoes, green peas, and apple cobbler. Rob opted for the cheeseburger and onion rings.

Famous Louise’s is unique in that it sits on the junction of three county lines. We sat in McDowell County to eat, went to the restroom in Avery County, and paid for our meal in Burke County. Well, I must clarify that Mary paid for my meal as thanks for driving the crew to North Carolina for the day’s adventure.

We emerged from the restaurant to a parking lot full of Christmas tree laden cars and trucks from several different states. The perfume of fresh cut evergreens permeated the area. It almost made me want to stop off and buy a tree, but I thought of all the dogs and home and what kind of shape it would likely be in if I brought it into the house, so decided not to.

We stopped off in the town of Linville to look for one more geocache that Rob had not found on a previous visit. He was hoping that three extra sets of eyes would do the trick, but sadly we were unsuccessful. As the air got cooler, we abandoned the search, climbed back in the warm car, and headed toward home.

Rob had one last surprise in store for us. After we passed through Roan Mountain, he directed me off the highway onto the Old Railroad Grade Road built along the route of the Tweetsie Railroad. It followed the Doe River, and in a couple of places passed between towering rock walls. The passageway was so narrow at one point, that I was happy to be in the smaller vehicle rather than my big truck. I’m afraid I might have lost a mirror. This was a pleasant detour, and a fitting end to our wonderful day together.

I learned on this trip of many places in the area of Linville Gorge that I want to visit in the future. I believe I will be making many trips back to this beautiful place. 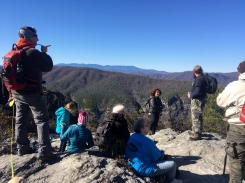 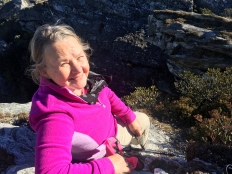 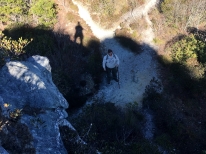