Mrs. Jack (Dori) sent out an invitation to join her on a Black Friday hike and I was happy to #optoutside. It was decided that we would visit the waterfalls along Little Stony Creek near Dungannon, VA. I have long wanted to hike here, and eagerly awaited the day all week.

LakeBum (Rob) and I met Dori, Jenny (Dori’s mom) and Rob (Jenny’s boyfriend) at the trail head. Jenny and Rob were visiting from Georgia and Florida.

It was a chilly morning, so we all quickly donned jackets, hats and gloves before heading down the trail. I was happy to have my beautiful hand-knitted hat that Dori recently gave me.

Since we had muggles along, we did not plan to do a lot of geocaching along this trail, but simply hike and enjoy the beautiful waterfalls. We did pause momentarily at the trail head to give a quick look for a cache that Dori had searched for unsuccessfully in the past. When we didn’t find it at first glance, we decided to move on down the trail to see the waterfalls.

This is a well-maintained trail with very nice bridges to help you cross the creek. Someone had left a trail of rose petals, and we speculated as to why. Perhaps someone had come brought their loved one here to propose?

Less than a quarter mile down the trail we crossed the first bridge and could see that there was a waterfall below us. I hurried ahead of everyone else so that I could have time to photograph the waterfall, but Jenny wasn’t far behind. We climbed down several stone steps to reach the creek near the base of the falls.

I was carrying my good Nikon and tripod with me, and had just purchased a polarizing filter, so was hoping that I would capture some good photos. The skies were perfectly clear, with no clouds to help with the glare on the water, but the sun was not yet high enough  in the sky to cause problems at this first stop. This first waterfall is about 25 feet tall and beautiful.

After everyone had the chance to take photos, we did a group shot, and then climbed back up the steps to the trail. Another quarter mile down the trail we reached a second bridge. Just below it was a small waterfall. By this time, the sun was starting to peek over the trees, making it tough to get a good photograph, but the views were beautiful.

We continued down the trail, and reached an overlook that gave us a view of the next waterfall, a curtain-type falls that is about 20 feet tall. We chose not to climb the steep spur trail to the bottom of this waterfall, and enjoyed its beauty from the trail.

As we continued down the trail, we enjoyed a few more cascades and the confluence of Little Stony Creek and Ramey Branch. We then reached the lower falls, a 10 foot cascade. While enjoying this area, I noticed that Dori and Rob appeared to be looking for something. Apparently they had decided to search for a nearby geocache, and that was fine with me! After a lengthy search, I finally came up with the cache.

We weren’t sure if there were more waterfalls to see downstream, so we continued down the trail another 3/10 mile. When we reached a point in the trail where it looked like it was starting to climb, we decided it was time to turn back. We certainly did not want to break the flatlanders hiking with us.

On the way back up back up the trail we stopped to log two more caches. One was a tough reach just off the trail, but behind some rhododendron bushes that wanted to hold me prisoner. The second was hidden under one of the bridges.  We passed up more caches than we sought, so there are ample reasons to return to this trail.

As we were approaching the parking area, we noticed a familiar figure standing by the trail. It was a geocacher named mtmanva2 who lives in the area. He was actually the person who had hidden some of the caches we found along the trail. He said that he was passing by and saw my truck with New Cache Order across the back, and decided to wait around to see if we would emerge from the hike soon.

Dori was very glad to see him as she wanted a nudge on finding the cache we had briefly looked for near parking. He headed over to show us where to find it, but came up empty-handed in the two or three spots he searched. I joined in and once again made the find.

We left parking and drove a short distance up the road to a pull off, and then followed a short trail out to Bear Rock. From there we enjoyed beautiful views of the valley. We were also there to search for another geocache, one with a 5/5 rating. All geocaches are rated one a scale of 1-5 for difficulty and terrain with a 5/5 being the most difficult.

The reason for the terrain rating of five on this one was the need to climb down into a narrow crevice in the rock, and walk along a ledge with drop offs of 20 – 30 feet. Dori and I immediately dove into the abyss and began searching. Dori had been with a large group who found this cache a few years ago, but she had her boxer Obi with her and had to hold him rather than helping with the search. We still had mtnmanva2 with us, who had also found the cache a few years prior, so he was above given us suggestions of where to search.

Unfortunately, after an extensive search we had to climb back out without finding the cache. I have since received a message from the person who hid it, giving me some hints to help with the hunt next time we visit.

The weary hikers all settled down on a nice flat rock while Rob and I ate lunch, and mtman regaled us with stories of hunting bear and deer. Soon, Dori and her family took their leave, while we lingered a bit longer. I walked over one last time to look lingeringly into the crack wishing I could find the cache, but decided to leave it for another day.

On the drive home, Rob wanted to stop off at a location where he had hidden a cache back in the summer when we paddled the Clinch River. The reviewers had declined to publish the cache because it was just inside National Forest territory, so he wanted to retrieve the container. As we drove, he checked his phone and saw that there were three caches hidden along the gravel road that we needed to travel to reach that cache, so we decided to search for them while we were here.

We came up empty-handed on the first one, despite an extensive search. We had more luck with the second and third, and then retrieved Rob’s container. On the way back to the main road, we stopped briefly to look again for the cache we didn’t find, but still had no luck.

This was a wonderful day involving some of my favorite things, waterfalls, hiking, geocaching, and friends. I look forward to returning there soon to find the rest of the caches and enjoy these waterfalls once more. 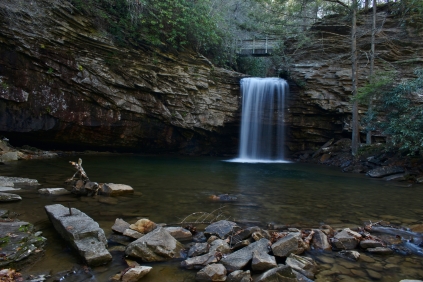 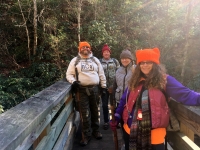 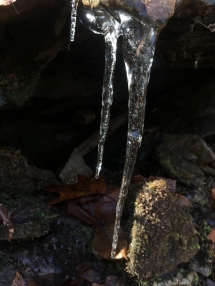 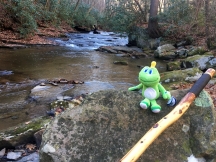 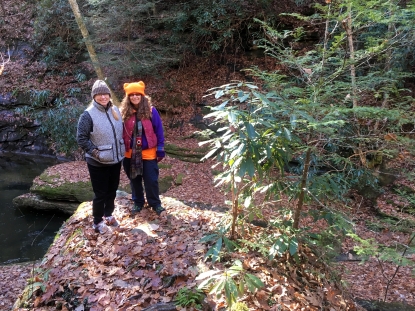 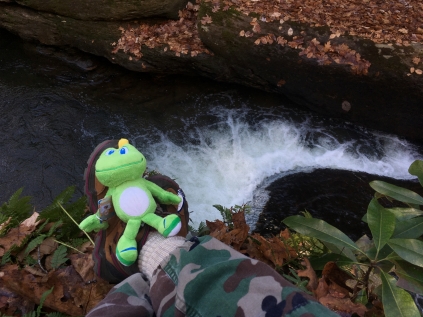 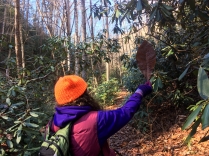 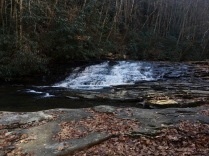 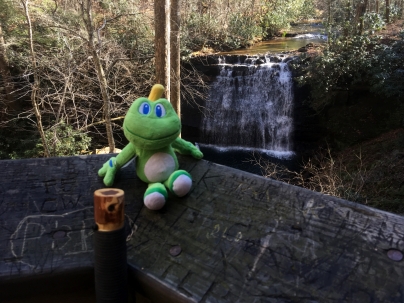 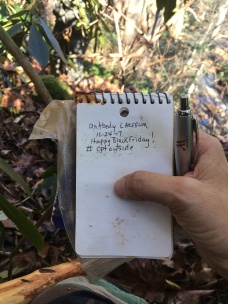 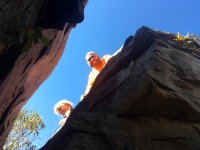 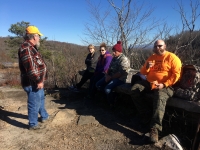