Several months ago, LakeBum (Rob) and I hiked in Sugar Hollow Park, logging the geocaches on one side of the park. During Saturday’s Trail Mix at Bay’s Mountain, we talked about what we might be able to do today that would allow both of us to get back home in time to spend time with our significant others in the afternoon. Finishing off the caches in Sugar Hollow Park seemed like a great choice.

We invited Team Cache Cracker Jacks (Tom and Dori) to join us. This was a rare opportunity to spent time with this great pair on a weekend, so we knew we were in for a great day. Making it even more special was the fact that it was Mrs. Jack’s birthday.

We met up in the cool early morning. Mrs. Jack surprised me with a special gift, a beautiful red and purple hat that she had knitted. I am so proud of her for learning this new skill, and for putting it to such good use with her new ministry, Knot for Sale Hats. I look forward to sporting my new hat on November 13 when I help her with her Kindness Caps event.

When we arrived at Sugar Hollow Park, we revisited a cache near the ball fields that Rob and I had not been able to find on our last visit. It had been replaced since then, so we made a quick find there, and then walked over to another ball field to find a puzzle cache that Rob had solved.

We then moved the car to a parking area near the middle of the park, and hit the trail in search of more caches. The weather was perfect; just warm enough to comfortably hike in short sleeves. The fall foliage was beautiful.

In the first cache we found along the trails, Mrs. Jack found a very appropriate piece of swag – a birthday candle. It was even her favorite color – purple.

I believe the trails in this park are mostly meant for bicycles. They zigzag back and forth quite a bit. After finding that first cache, we walked for several minutes, following the trail, and then I checked my phone to see how close we were to the next cache. I was amazed that we were just 80 something feet from the cache we had just found. There are definitely more direct routes in these woods than the trails follow, but we were in no hurry.

At one point, the trail took us along a beautiful stream. I stopped off at a small cascade to try out a new technique with my iPhone camera. I have been watching videos on Facebook about iPhone photography, and had learned how to take a long exposure shot of moving water to get the silky effect that is usually only possible with an SLR camera. It worked fairly well, but the quality is not even close to what I could capture with my Nikon.

After finishing up our first hike of 3.4 miles, we were back at the parking area. We were preparing to take a selfie with our beautiful hiking sticks, all handcrafted by BackWoods Ang, when a man playing disc golf offered to take our photo. Perfect timing!

We then walked toward the wetlands so that Rob and I could log the Earth Cache that Team CCJ has there. I was amazed to learn that during rainy times of year, this whole area is sometimes covered with several feet of water.

Just past the wetlands was a cache that none of us had logged yet. It was placed at a time when the water was up, and the hider had kayaked to the spot where it was hidden. On this day, with no water, the cache was about 15 feet up in a tree! According to the cache page, the owner was sitting in her kayak when she hid it.

When Mrs. Jack and I arrived at the tree, the Captain and Bum were standing around looking as if neither wanted to attempt the grab. I emptied my pockets, handing keys, phone and Signal the Frog to Mrs. Jack, and then made my first lame attempt at climbing the tree. I quickly found it was going to be harder than I thought. Fortunately, Rob offered a helping hand, or rather two hands in which I could step to get a better grip on the lowest branch. Dori helped out by bracing me as I wrapped my legs around the branch, and then swung up on it. From there, I could easily reach the cache, and signed the log for all of us.

I managed to exit the tree without incident, and then we made our way to find one last cache on the far side of the park. This walk took us through a beautiful grove of tall pine trees that looked as if they had been intentionally planted in rows.

Eventually, we were back at the truck, and happily headed back toward Kingsport and the one thing we had all been looking forward to all morning – lunch at Waffle House. This had been Dori’s request of Tom for her birthday meal, and ever since she had mentioned it I had been craving a pecan waffle. We felt that we had earned such a meal after two days of hiking, and I topped mine off with scattered, smothered and covered hashbrowns and bacon. Yum!

I was back home by 2:00, in time to take care of a few chores like washing the dogs, and then spend some time on the couch catching up on recorded tv shows. All in all, it was a great weekend.

I will close by saying, anyone who knows me knows I love to travel and see new places. But, I also LOVE our area of the world. There are so many parks, mountains, lakes, streams and rivers here to see and enjoy. There’s no place like home! 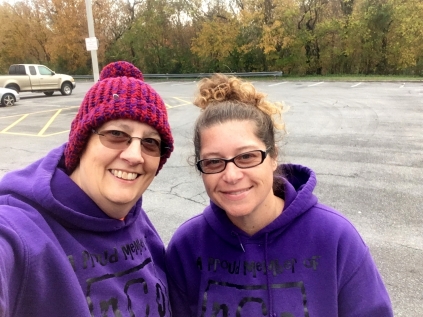 My new hat, made with love by my bestie Dori.

The birthday girl – a tad older than 0.

Trying out the long exposure technique on my iPhone.

Blue heron in the wetlands

This crew keeps their feet on solid ground while I get high. In a tree.

Signal says, “Pay no attention to the big red sign. Feel free to approach and/or feed me at any time.”