A plan was hatched this week to hit The Sluice for a Thursday evening paddle. I happily accepted the opportunity to join in on the phone after a busy day in the office. Joining Huck and I for this float were Team Cache Cracker Jacks (Tom and Dori), BackWoods Ang (Ang) and 3/4 of Team Reis’s Pieces (Scott, Eli and Mallorie).

As has been typical of late, the river was running high and fast as TVA was running at least two generators at the Fort Patrick Henry Dam. When we met just below the dam, we saw a lot of fast moving water flowing by our put in spot. Once we had our boats in the water, we immediately began a fast ride downstream.

Today’s float was for recreation only. We did not plan any stops for geocaches along the way. Instead we steered our boats and took time to enjoy the scenery as it sped by. Along the upper stretch of river we were treated to the sight of several osprey flying overhead. I also caught a glimpse of an otter swimming along the shore, the usual turtles and great blue herons that we see on our area rivers, a beautiful red-wing blackbird, and some adorable little ducklings that followed their mom into the water and swam away from us in a row. For the first time we were treated to the sight of a train crossing one of the railroad bridges as we floated under it.

Two miles downstream, the river splits around Long Island. We took the left-hand route, known locally as The Sluice. This is a more scenic route than the main channel, and when taking the main channel it is necessary to take your boat out and portage around the weir dam, making The Sluice our preferred route.

The littles in our group began to grow hungry after we entered The Sluice, so their dad began to look for a spot to pull over for a snack. This was easier said than done with the speed of the current, but we finally found a spot just upstream from where Horse Creek flows into the river. In fact, because the water was so high we were able to steer our boats through the trees and pull up onto the flooded paved walking trail.

While they enjoyed stretching their legs and having a snack, I paddled back upstream a little way to try to get some pictures of the turtles I had seen earlier. They plopped into the water and swam away before I could get a photo, but it was here that I saw the red-winged blackbird fly past, so it was worth the effort. I then pulled up to the walking trail and took advantage of the chance to have a bite to eat and get out to take a short walk.

We then resumed our trip, enjoying the bouncy waves where there are normally small rapids next to Domtar Park. Once past Domtar, The Sluice rejoins the main channel and the river widens and slows. From here to the take out point we had to actually paddle to make our way downstream.

We did make a short stop on an island near the take out point so that Reis’s Pieces and BackWoodsAng could try to find the final of a multi cache that I had found in March. Unfortunately, the increased foliage on the trees meant we couldn’t spot the cache, so we gave up and called it a night.

Dori and the kids waited with our boats while Tom drove the rest of us back to the put in point to retrieve our trucks. While we were gone, a group of young men in kayaks that we had seen at the put in earlier in the evening finished their float. They told Dori that they had not had as nice a trip as ours. They took the main channel, and some of them capsized in the rapids near Riverfront Restaurant and lost wallets and phones. THIS is why a smart boater keeps their valuables in a dry bag that is tethered to the boat.

Our total time for the trip was two and a half hours, but time on the river (allowing for the two stops) was only about two hours. It was a quick, but enjoyable trip on a beautiful evening. 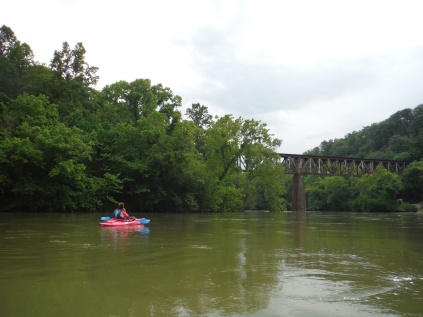 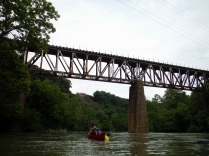 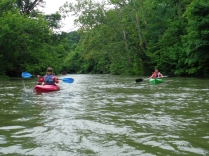 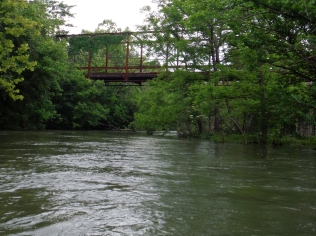 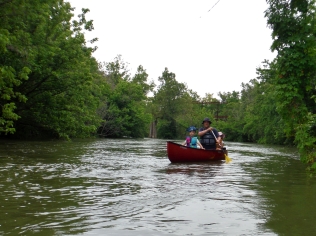