When my geopal LakeBum (Rob) invited me to join in on a paddle trip on the Clinch River, I jumped at the chance, despite the fact I had just returned from vacation and was just getting ready to start a week of hosting a mission team from the Czech Republic. We had made this trip last June, and it was a blast. I knew this one would be an all day affair once you add the travel time to and from the river and the lengthy shuttle time.

I met Rob at his house, and rode with him to his brother Richard’s house. As we left Rob’s house, I mentioned that I had never taken time to look for the cache along the road leading out of his neighborhood. He stopped off so that I could find it, but it had gone missing. There were several DNFs (did not finds) logged on the cache page, and the last Found It log was nearly two years ago.

I had a spare magnetic key holder in my truck, and since we needed to go back to the house to get something Rob had forgotten, I grabbed it and stopped off to replace the cache as we headed back out.

At Richard’s house, we met up with him, his daughter, Julia, and a family friend, Reece. Since we would need two vehicles for the shuttle, Julia and Reece rode with Richard and I rode with Rob. We loaded all of the boats into and onto Rob’s truck, and headed for Virginia.

We had only made it a short distance before Richard called to report that they had forgotten their lunches and needed to turn back. Rob and I continued to a parking area in Gate City to wait for them. While we were waiting, I walked a short distance to find a nearby cache that Rob had already found.

Finally, the rest of the group caught up and we were on the road again. The drive to Miller’s Yard, where we would end our paddle, took about 35 minutes from Gate City. We left Richard’s vehicle there, and then made the 25 minute drive to the launch point at Burton’s Ford.

We finally hit the river at 11:45. It was a beautiful, sunny day and I was excited to be doing this trip again. As is often the case, I was the only kayaker. Rob and Julia paddled solo canoes. Richard and Reece teamed up in the tandem canoe.

Our first stop was at the confluence of the river and a creek where we had stopped last year. A short walk up this creek takes you to a beautiful waterfall. We enjoyed the view from the bottom, respecting the newly installed signs that warn against climbing the rocks for better views. Rob had hidden a cache nearby during our trip last year, and it had not yet been found. I knew that a friend was planning this trip in a few days, so decided to sign the log sheet, but not log the find yet, giving him the chance to claim First to Find (FTF).

After enjoying the waterfall, we continued down river to our next stop, just above the only really technical rapid on this trip. We pulled over above the rapid to scout it out. As I paddled up to shore, I spied a huge wolf spider on a log hanging over the water. I have a very unhealthy fear of spiders, but got brave enough to place my hand near it for a reference photo showing how big it was. I managed to snap the photo, and then squealed as it scurried away, thinking it was jumping into my boat.

While the men were scouting the rapids, I took time to locate and log another cache that Rob had hidden last year. This one had also not been found yet, so I again signed on the second line, leaving FTF honors for others.

Once the scouting was complete, and we had decided that we would follow the same route as last year, I volunteered to go first so that I could take video and photos of the others coming through. I donned my helmet for safety, and paddled up stream a bit to approach from the right angle with adrenaline pumping through my veins.

Our chosen route takes us river left, just to the left of a train-car-sized boulder through a chute between it and a group of smaller rocks. The current swept me to the right a bit, and my kayak banged into the boulder before I straightened up and shot thru the chute. I was surprised when the water then carried me to the left of a large rock just below the chute. I remembered that last year all of us had gone to the right of it. But, the river has its own ideas, and this was the route it had chosen for me this time. It was a thrilling ride, and I was happy to have made it through safe and sound.

I eddied out behind a rock on river left, and set up to wait for the rest of the group to come through. As each of them made the journey, I shot video with my bow camera and took still shots with my iPhone. Unfortunately, as I was writing this I learned that my video footage is gone so all that I have left are the stills.

Julia had not paddled this rapid last year, letting her dad take her boat through. This year, with more experience and confidence under her belt, she ran the rapid, and did a great job.

After everyone had made it safely through, Rob suggested that I portage back up and run it again so he could document my second run. I was happy to do that, although I began to wonder about my sanity as I fought the current upstream, rock hopping and dragging my boat behind me. I I left a fair amount of blue on some of the rocks, and gained some new scratches on Huck’s hull in the process, but finally I was in position to paddle through again.

I missed bumping the boulder my second time, but this time the river surprised me once again by carrying me to the right of the rock below. I wasn’t expecting that, but once again the river had its own idea about where I should go. Rob and I joined the rest of the group, only to find that they were eating lunch, so I had a quick bite to eat before heading downstream.

In some of the calmer water that followed, Richard gave Reece some instruction on paddling from the stern of the boat. They zig-zagged across the river as Richard would indicate a reference point on the far bank, and tell Reece to steer toward it.

Rob stopped at a small island where he had hidden a third cache last year, so that he could check on it. I walked over with him to sign the log, but we discovered that it had been swept away during floods from its spot hanging in a tree. I made the journey back to Rob’s boat for a replacement, signed the log, and then brought it back to him for placement. He hung this one much higher, so hopefully it will survive high water.

We paddled a while longer, and enjoyed some small rapids along the way. We then stopped for a break to have a snack and a swim. As we were resting, I noticed some mountain laurel blooming across the river, and paddled over to take photos. I happened to have some geocaching containers in my dry bag, so decided to hide a cache under the laurels.

The views along the next section of the river are beautiful, including some towering cliffs. There are a couple of “wave train” type rapids that are fun to paddle through. These don’t have a lot of big rocks to avoid, but have one wave after another for your boat to bounce over and through. In one of the calmer areas, a splashing war ensued, with everyone using their paddles to splash each other. It felt good in the hot sun to have a little splash of water cooling us off.

We stopped again at the confluence of the Clinch and Guest Rivers. Richard, Julia and Reece were brave enough to sit in the colder water of the Guest River, and took turns floating down on their backs.

Past the Guest River are a few more small rapids, and lots of flat water paddling. I was surprised to see a mimosa tree along the banks that was still blooming. I watched for a landmark I had discovered on our last trip, an old bus that looks like it is being used as a camper. Soon after seeing it, we passed under an old swinging bridge and knew we were nearly to the end of the trip.

Once we left the river at Miller’s Yard, I drove Richard’s vehicle to Burton’s Ford so that Rob could retrieve his truck. We then made our way back to Miller’s Yard – a 50 minute round trip. Along the way, I stopped to take a photo of a street sign I had noticed on the drive in that morning. Whoever made it must have failed spelling, because the road was named “Buffalow Hollow.”

When we got back to Miller’s Yard, we were pleased to see that the others had moved the boats nearer to parking in our absence. We loaded them up, and started the drive back home. Richard and the kids needed to get back early for dinner, so we sent them on their way. Rob and I stopped along Highway 72 where there is an old Army tank and memorial to veterans. There is a cache there that we have passed up on numerous occasions, so wanted to log it. We found the cache easily, but realized that neither of us had carried a pen with us, so Rob had to go back to the truck and get one. Rookie mistake!

We finished out the evening with cheeseburgers at the Hob Knob in Gate City. It was very busy and we had to wait for a table, despite the later hour. It was a great ending to a great day, and I even splurged on a delicious peanut butter milk shake for the drive home.

I arrived home late, and spent the next few days preparing for and then hosting the Czech team. After they left a week later, I had a busy day in the office before heading to Hawaii to visit family. It was only after completing another paddle trip a month later, that I realized I had never written this post, so here it is. It is long delayed, but I’ve enjoyed reliving the day through the writing process.

Rob posted his video of the trip here. 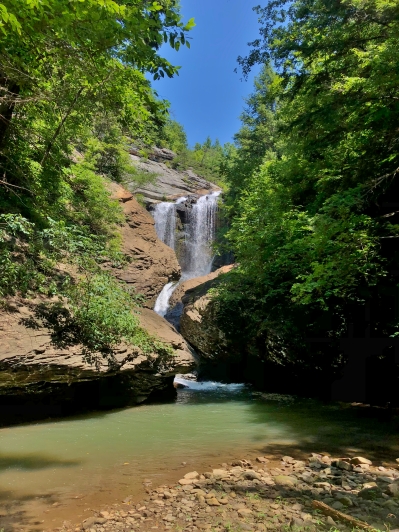 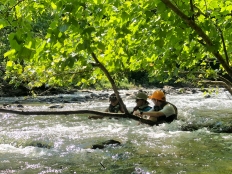 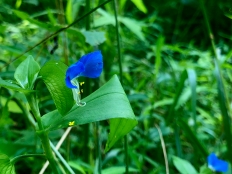 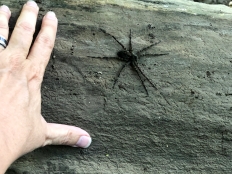 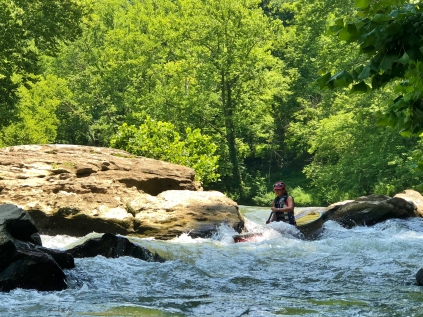 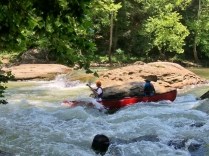 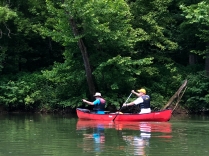 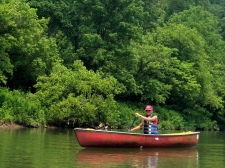 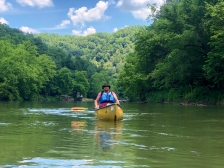 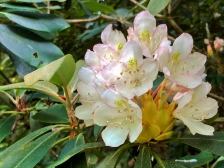 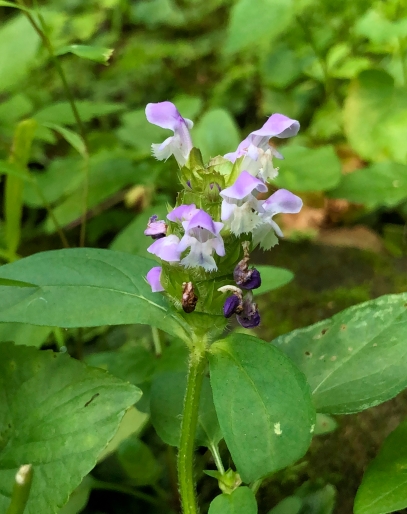 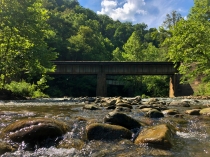 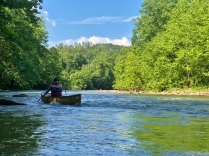 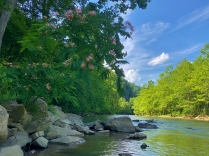