First, a couple of disclaimers:

I drove back out to the Wilbur Lake area on Saturday afternoon to look for my hiking stick. I had no luck. I left a note taped to a tree near where I had parked, and left another on the door of the church nearby. I can only hope that some good samaritan picked it up for me and will see one of my notes and give me a call. I am trying not to lose hope, but I fear I’ll never see it again.

So, this weekend I used a hiking stick that I had bought for Deban a few years ago. I didn’t do any long hikes, but spent both Saturday and Sunday chasing frozen waterfalls with some good friends. Saturday morning’s adventure took us to Hancock County to see Elrod Falls. After the unsuccessful hunt for my hiking stick, I decided to drive on out to Blue Hole in Carter County. Since neither of these outings included a hike, I posted the photos on Facebook rather than here. You can see those pics HERE.

When rudekoolaid (Angela) said that she and her husband Billy were planning to go to Little Stony Creek on Sunday afternoon, I jumped at the opportunity to see some more frozen beauty. We were joined by tncorgi (Mary) and muggles Kelyn and Kenny.

I had visited this area for the first time in November, and loved the beautiful falls there. I was looking forward to seeing them frozen. Apparently, half of Scott County and people from surrounding areas had the same idea. When we arrived at the parking area it was packed.

There is geocache hidden near the parking lot that I had logged on my last trip. I directed Angela and Billy in the right direction to grab it before we joined the others who were already at the first falls.

Upper Little Stony Falls is just a short distance down the trail from the upper parking lot. A nice bridge crosses the creek above the falls. Just past the bridge are stone steps leading down to the side of the creek near the bottom of the falls. The entire creek was frozen solid, and dozens of people were on the ice.

When we had explored these falls to our heart’s content, we climbed the steps back to the trail and followed it about 50 feet to search for a geocache. Despite a very detailed hint, we had a bit of trouble finding it. We were nearly ready to give up and move on down the trail when I moved the right rock and saw the cache hiding under it.

Once we had signed the log, we continued on the trail. Another cache is hidden under the next bridge, and we stopped so that Mary and Angela could find it. This was another that I had found on my last trip.

A small waterfall is just below this bridge as well. It was very pretty, but even more beautiful were the icicles on the rocks across the creek from the trail.

After taking a few photos here, we continued down to Lower Little Stony Falls. This waterfall is just as tall as the upper falls, but wider. Most of the visitors had stopped at the upper falls, so we had this one to ourselves much of the time we were there. The girls in the group took turns climbing onto a low ledge to have our pictures taken, and then sliding off.

By this time, daylight was waning so we headed back up the trail rather than continuing on to the cascades further downstream. We stopped on the way back up the trail so that the others could log one more cache, and again near the parking lot so that Mary could sign the one she had missed at the beginning of the hike.

On the drive back toward home, we stopped off to find a geocache in a graveyard, and then stopped for supper in Dungannon, VA.

This whole weekend was an amazing opportunity to witness something that rarely happens in our area. While there may be some ice on our waterfalls from time to time, it is unusual to see them frozen this solid. It is also rare for the creeks to freeze solid enough for us to walk on the ice. I will remember these sights and experiences for a long time. 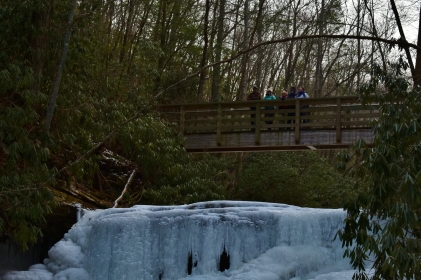 My hiking companions on the bridge above the middle falls. 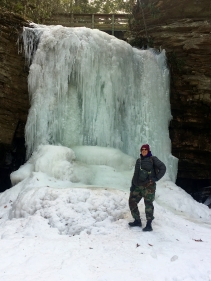 Me at Upper Little Stony Falls 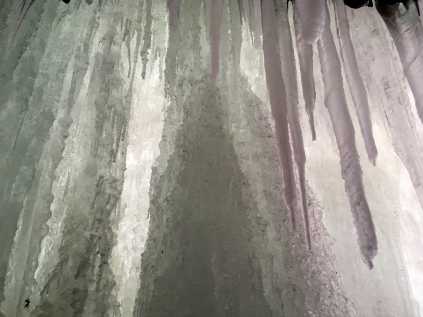 Backside of the falls 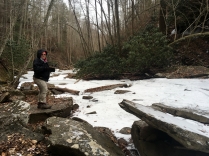 Mary by the creek 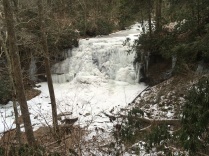 Lower Little Stony Falls from high on the trail 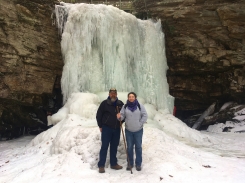 Billy and Angela at the upper falls 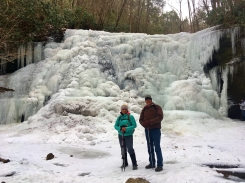 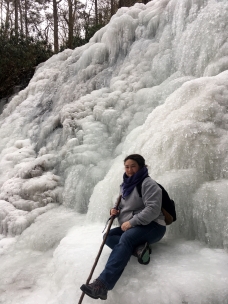 Angela on our perch at the lower falls 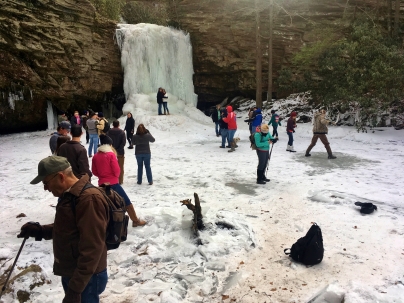 Crowds of people at the upper falls 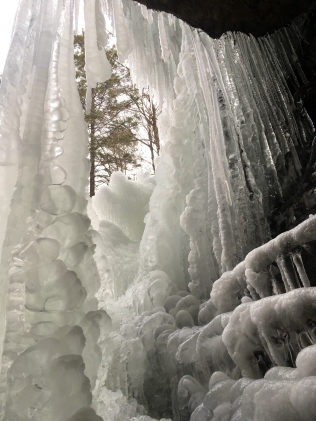 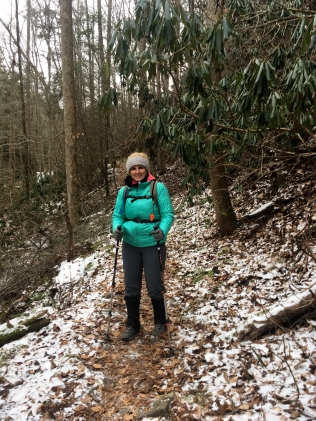 Kelyn on the trail 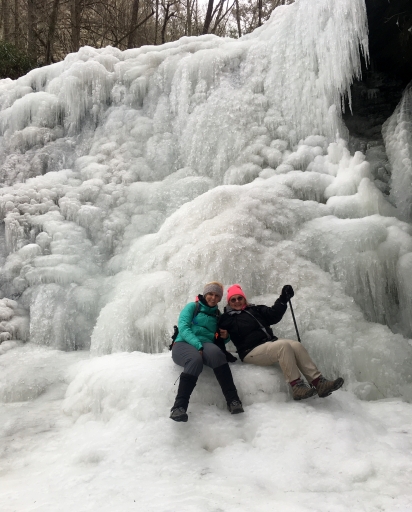 Kelyn and Mary at the lower falls 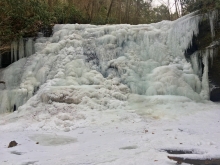 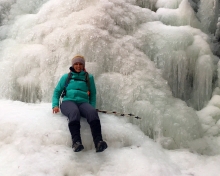 Kelyn at the lower falls 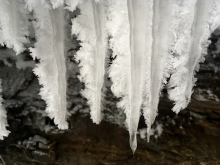 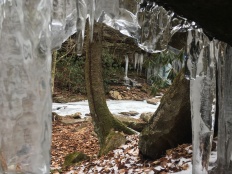 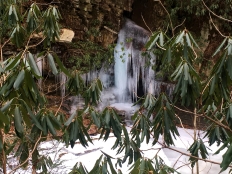 Icicles on the rocks 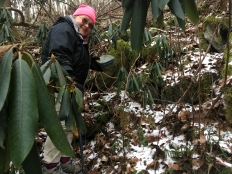 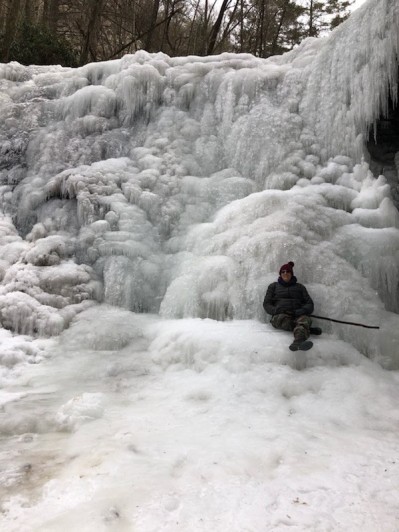 Me at Lower Little Stony Falls 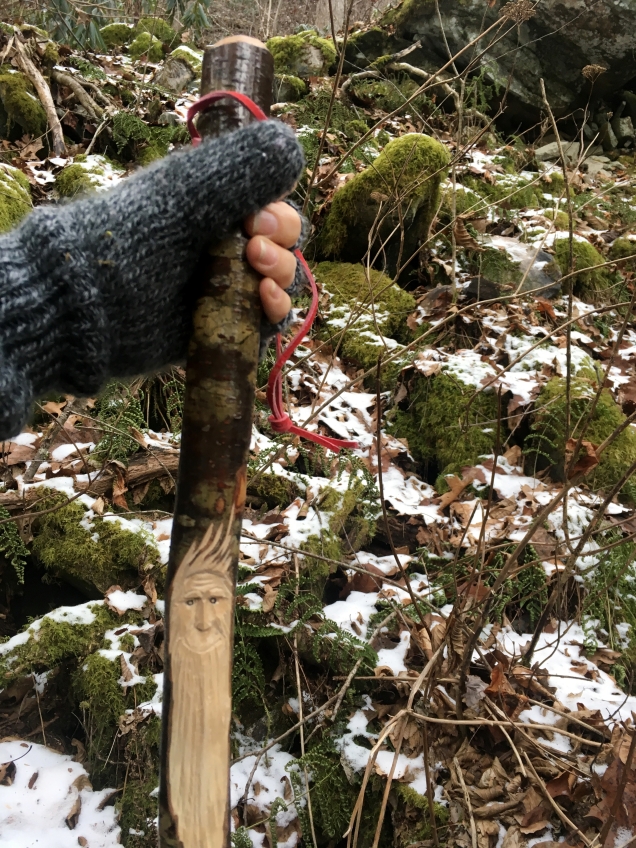