LakeBum (Rob) and I decided to squeeze one more hike in before our holiday breaks ended. We had originally talked of going to Phipps Bend, a nice flat area with a paved walking trail where we could log several geocaches. At some point, Rob posed the question in a text, “Phipps bend, or Wilbur dam? Start the new year with some DM t4’s?” Something came over me and I responded, “That would be a good way to start.”

So on the coldest morning of the year we headed out to Wilbur Dam in Carter County to tackle some more rough terrain. Yeah, I know. It was the first day of the year, so saying it was the coldest is a bit of a stretch. But, it was a frigid 12°F. Who in their right mind hikes in that kind of weather?

As you’ve read in other recent posts, we have been on a mission to earn Rob his Frequent Flyer status so that he can log a challenge cache at Bay’s Mountain. Prior to this hike, he had found 19 DMflyer caches with a terrain rating of four or higher, and just lacked one more. This hike would garner him three.

This was also an anniversary hike of sorts. My first hike using my cedar hiking stick was one year and a day prior – December 31, 2016. That hike was also with Rob, and we have logged many miles together in the past year.

We arrived at the trail head at a little after nine a.m. and pulled on some extra layers of clothing. We had not had more than a few flurries of snow at home, but here there was a very small amount of accumulation. The temperature felt even colder next to the river where we parked. As usual, I had layered my clothing, and I once again wore my balaclava (full face mask).

Our route took us up a snow-covered, gated service road. Key word: UP. Actually, this was a fairly gradual incline, but starting out in the cold weather, immediately going uphill was brutal. Fortunately, we only had to go about a tenth of a mile before stopping for the first geocache. The view of the river below us was beautiful at this point.

I took off my backpack and exchanged my fuzzy mittens for gloves, and climbed over the edge of the rocks to find the cache. Rob helped from above, re-reading the cache hint and instructing me not to die. I finally found it, and signed our names to the log.

Once back on the road, I put my backpack on, and we continued the climb to the next cache. By the time we reached it, we had only traveled one third of a mile and gained a little over 100 feet in elevation. This was the easy part of the journey. Rob found this cache, and then we turned our attention to the next target.

The name of the next cache was “Cardiac Hill” which gives you a good idea of what we were facing. The service road we had been walking on became a power line right of way at this point, and we followed it further up hill, pushing our way through tall vegetation at times.  When we reached the highest point along the power line, the instructions on the cache page said to follow the faint trail with faded orange blazes. When this cache was hidden eight years ago, there may have been a faint trial with faded orange blazes. Now, there is only forest, and a whole lot of UP.

The cache page also said that the cache was only 300 feet from the tower, but at an elevation 250 feet higher. Did I mention UP? Add in a thick layer of leaves covered in snow, and you have a recipe for cardiac arrest. The 300 feet felt like a half a mile, but finally we spotted an area that matched the hint.

Rob made the find while I put on my Yak Trax – traction devices that fit over your boots. I knew we had even more climbing ahead of us, and wanted the extra security they provide in slippery conditions. This cache was Rob’s 20th DMflyer 4+ terrain, and earned him the right to finally go for the challenge cache we visited last week. We could have stopped here, but there were two more caches higher up that we wanted to log. So, we continued to climb.

At times we saw a semblance of a trail, and even saw a few blazes along the way. Someone or something had come this way since the snow fall as evidenced by the churned up leaves. We were able to follow their tracks much of the time, but sometimes had to veer off when the tracks led under low hanging branches or through thick vegetation.

We finally reached an old ATV road that was described in the webpage of the next cache we were hunting. It looked as if it had not been used in years, but did offer a little easier travel than the quasi trail we had been following. We checked our phones, and realized we had passed the cache about 70 feet back, so retraced our steps to find it.

When Rob read the description of the cache, we learned that we were looking for a match safe hidden under two rocks. A match safe is a small plastic cylinder about three inches long and one inch diameter. Not an easy container to find in the middle of the woods, especially in the snow. Somehow, after only  a short search I found the right two rocks, pried them loose from the frozen ground, and found the cache underneath. I signed the log, and we quickly headed uphill in search of the last cache.

Our final target was a cache hidden at the top of the mountain, at an elevation of 2750 feet. We had hiked less than two miles to find it, but it was rugged terrain and quite a climb. For these reasons, this cache boasts a terrain rating of 4.5 out of 5 and is called “Ring the Bell,” referring to the method used to “tap out” of Navy Seal training’s Hell Week.

The cache page includes the following quote from navyseals.com:

“Hell Week is a test of physical endurance, mental tenacity and true teamwork where 2/3 or more of your class may call it quits or “ring the bell ”. Physical discomfort and pain will cause many to decide it isn’t worth it. The miserable wet-cold approaching hypothermia will make others quit. Sheer fatigue and sleep deprivation will cause every candidate to question his core values, motivations, limits, and everything he’s made of and stands for. Those who grit it out to the finish will hear their Instructors yell the longed-for words, “Hell Week is secured!”

This gives you an idea of what we endured to reach the top and claim this geocache. It was quite the journey, and many muggles (non-geocachers) cannot understand why we do this. But, there is great satisfaction in overcoming both mental and physical obstacles to find a geocache.

After signing the log sheet, we retraced our steps a few hundred feet downhill and sat on a log to enjoy our lunch. As we sat down, Rob exclaimed, “They need heated seats up here!” We both had brought soup in our thermoses, and the warm liquid felt good going down.

Sitting still to eat, I really began to feel the cold. My fingers were especially cold since I had taken off my gloves to eat. As soon as I finished, I got up to walk around a bit, hoping to warm back up. Unlike other recent hikes, I had not shed any of my clothing on this hike. I was still wearing all my layers, including my warm down jacket and balaclava. I was glad when Rob finished up his lunch and was ready to start the hike back.

On the downhill trip, my YakTrax came in very handy. I was able to navigate the slippery slopes without problems, even the very steep area that we had climbed without benefit of a trail. Once we were off the ATV road and in the forest, our route back down was obvious. We just followed our own tracks from our earlier ascent. That is one benefit of hiking in snowy conditions.

We made the trip back down much more quickly than up, and soon were back to the truck. On the drive back out, we stopped at the picnic area on Wilbur Lake. I had heard there was a waterfall that flows into the lake, just across from the picnic area. Little Laurel Branch Falls was frozen, but as I went to the shoreline to take some pictures, I could hear water running beneath the ice. I didn’t spend much time, because it was so cold and Rob was waiting in the truck. I will be sure to return someday to get better photos of these falls.

It was still early in the day, so I even had time to stop at Deban’s office on the way home to help her hang pictures on the newly painted walls. This was a great start to the New Year. I’m looking forward to many more adventures in 2018 with my cedar hiking stick!

First cache of the new year! 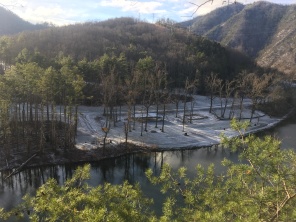 View of Wilbur Lake from the site of the first cache.

Our hiking sticks and Signal at the second cache site.

Bundled up and ready for cold weather hiking.

The views were beautiful.

Signal enjoys a rest at the third cache.

My YakTrax came in very handy. 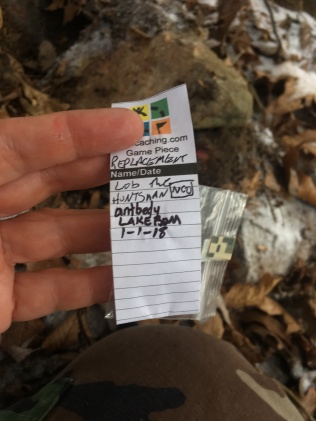 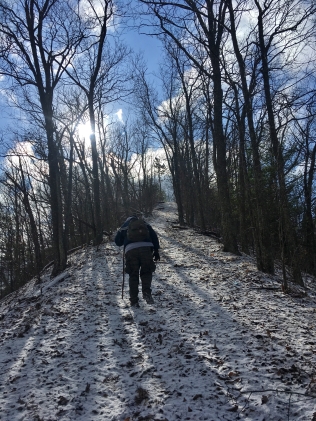 Up and up and up… 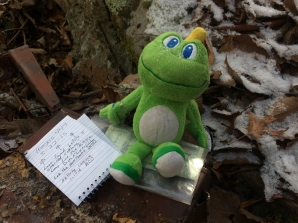 Little Laurel Branch Falls was frozen, but I could hear water running under the ice.