Signal the Frog® and I joined LakeBum (Rob) for an adventure on Cherokee Lake in Hamblen County, TN. Our goal was to log the eight new geocaches that our friend BackWoodsAng had hidden a few weeks ago.

The series is entitled Cherokee Archipelago and is on a string of islands (hence archipelago) in the western portion of Cherokee Lake. While Ang and our friends Cache Cracker Jacks (Tom and Dori) hid these eight caches using human power  (paddling their kayaks) we decided it would be quicker and easier to use Rob’s jon boat. The total distance we covered was a little over six miles which would have been a long, hard paddle.

The weather was partly cloudy and in the lower 60’s when we left the boat ramp. I was happy to be wearing my hoodie and long pants as we sped across the lake toward the first island. As the day warmed up, I was comfortable in short sleeves, and at times the water looked pretty tempting, but I never actually jumped in.

As we moved from island to island finding caches, we noticed that each of these bodies of land had its own unique character. The beaches of some were rocky, some were sandy, and some were solid, red mud. Even the ecosystems of each were different, ranging from dense forest with established hardwood trees and undergrowth to rocky terrain with ferns and evergreens.

On our second stop, we saw the first of many persimmon trees. Unfortunately, they were not quite ripe. Rob gathered a few to take home and see if they would ripen off the tree.

We agreed that our favorite island was one with only a few trees, but numerous non-native shrubs and flowers. We could see that there were obviously no wildlife present on this small island while we were there, but we saw racoon and deer footprints. This means they had to have swam to reach this island.

We saw some very interesting plants on this island, that you will see pictured below. Several of the shrubs had hard, bristly balls on them in shades of yellow and red. A couple of these shrubs also had one or two white, fuzzy blossoms. I would love to know what kind of shrub this is if anyone can help me identify them. On this same island we saw hibiscus bushes, trumpet vine, golden tickweed, more persimmon trees, and what I later learned was a winged elm tree. We also saw the leaves of irises. Based on all of these various types of vegetation, we decided this must have once been the site of a homestead.

The geocaches in Ang’s series were just as varied as the islands. Each cache was a different type and size of container. Each was hidden in a different manner. This made for a very interesting series, as we never knew what to expect at each location. As I was logging the finds after our adventure, and thinking back on each one, I believe that our find rate was pretty even, with Rob being the one to spot about half of them, and me spotting the others. We work well as a team.

Many of the caches contained trackable items. These are items that each have their own unique tracking code. When you enter the code on the geocaching website, you can see information about the travel bug, including what its goal is and where it has been. These items are meant to be moved from cache to cache. I had brought along my inventory, some of which I traded for during my recent trip to Europe, so I swapped them out for the ones in the caches.

The fifty year-old outboard motor on Rob’s boat was slow to start at the beginning of the day, and by the time we were leaving the seventh island it was really giving him fits. He had to pull the starter cord far too many times to count, and we began to wonder if we would have to flag down a passing boat for a tow. To make matters worse, the strong wind kept threatening to push us back against the rocks along the shore of that island, so that he would periodically have to stop pulling on the motor and man the oars to row us away from the rocks. I tried to help by paddling from time to time with a wooden paddle he had brought along, but the wind was much stronger than me.

Finally, the motor sputtered to a start and we moved on to the last island to grab the final cache in the series. The name of this cache was Beaver Tree, and it was hidden at a huge  tree that beavers had tried to fell sometime in the past. Apparently, they finally gave up, realizing it was simply too big a job.

After logging the cache, we decided to sit under the beaver tree and enjoy some lunch. At one point I joked that maybe I should ration my food in case we were marooned on the island by the finicky outboard motor. By this time we were 2.5 miles from the boat ramp as the crow flies, a trip of about 3 miles when you take into account the obstacles along the way we would have to navigate around.

Fortunately, the motor did start and we were able to make our way back toward the ramp. Rob had planned to hide a cache on this trip at an island a little further down the lake. However, he decided it would be best to find a spot closer to the ramp so that if the motor failed to restart after he stopped to hide it, we would be close enough to row the rest of the way.

We stopped within view of the ramp and Rob hid his cache. Then we made it back to the ramp, pulled the boat out of the water, and then searched for the cache that was hidden there. It was hidden in a guard rail, and when Rob pulled it out it was covered with strange looking bugs with electric blue heads and red bodies. I later learned that these were Florida Stink Bugs. I’m glad that they didn’t stink up the cache or us.

We then found a few more caches in the area of the boat ramp, including a fun puzzle cache. It involved first finding a traditional cache that contained three hints in the container for the puzzle. The first two hints were the north and west coordinates for the puzzle cache. The third was a numeric combination that we would need to open the cache.

The final location for the puzzle cache was within walking distance down a gravel road, so we set off in search of it. It turned out to be a metal box with an antenna on top affixed to a tree. As suspected it had a combination lock that had to be opened to access the cache.

As we walked back out of the woods, we encountered a man with two very young boys. The boys were dressed in blaze orange shirts, and each carried a rifle that looked very large in their little arms. We realized that hunting season must be upon us and that we need to start wearing orange when we are caching in the woods.

We stopped off in Morristown to find a cache with about 20 favorite points. It turned out to be a very large “dirty tube” – PVC pipe with capped ends. We then made our way toward home, stopping one more time along the way to find a couple of newer caches hidden by Ang and his mom RedRider at Exit 36.

It was a truly successful day, with a great variety of caches and sites. Cherokee Lake is much bigger than the small section we explored today, and there are many more caches to be found there. I hope to return soon to see more of this beautiful lake.

Heading out for some adventure.

Signal looks for a cache.

These knobby balls on several shrubs had very hard cores.

Also on the same shrub were occasional white, fluffy balls. 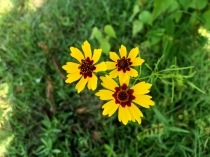 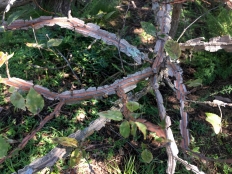 Winged Elm tree gets its name from the broad, thin warty growths along its branches. 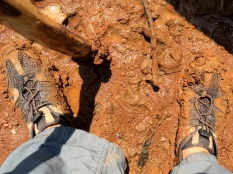 It was a little muddy on some of the islands.

Some beaver bit off more than he could chew.

Signal, Rob and I always wear our life vests.