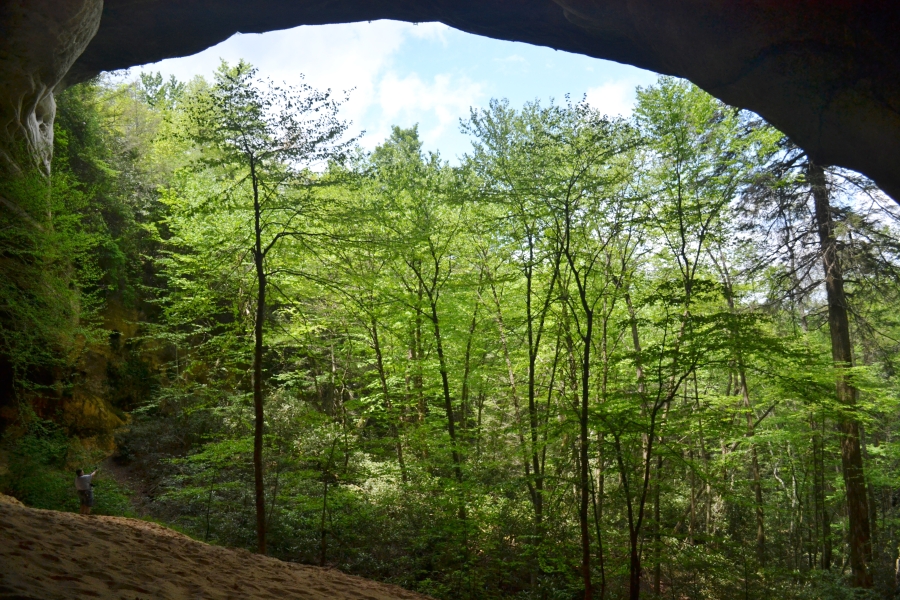 This special day began bright and early with me meeting friends in Kingsport at 6:45 am. Joining me for the ride to the trail head at Thomas Walker Civic Park near Ewing, VA were Cache Cracker Jacks (Tom and Dori) and LakeBum (Rob). Following us in his own car was my boss Walter.

A great crowd of us gathered at the park for the meet and greet event. Many were members of the New Cache Order family. We had cachers present from Kentucky, West Virginia and Ohio. And, of course, the one muggle, Walter.

This event was a milestone cache for me and for Cache Cracker Jacks. This was cache number 2,000 for me and number 3,000 for Tom and Dori. It has been a great caching journey so far, starting with my first cache in October 2012. I’ve been blessed to find many different types of caches, and have cached in 20 countries and 33 US states.

Tom and Dori brought along signs they had printed for us to pose with for photo ops. After everyone had gathered and we took a group pic, sixteen of us set off for our nearly ten mile hike.

This is not a hike for the faint of heart. The first 3.25 miles is a slow, steady climb with an elevation gain of 1,045 feet. The trail is wide but rugged, and one must watch out for horse droppings along the way. I saw several wildflowers blooming along the way, and at one point we saw a deer watching our progress along the trail. There are two EarthCaches along the trail which I had logged on a previous trip.

The next half mile is the toughest of the whole trip with an elevation gain of 640 feet to the top of the mountain. I was very happy to make it to the top  and realize that while I was tired, I had done it with much less effort than when I last hiked this trail a year and a half ago. All of the miles I have put in and pounds that I’ve lost are paying off. Of course, having my beautiful, sturdy cedar hiking stick along helped.

At the top of the mountain, the scenery changed as we hiked along the ridge line from Virginia into Kentucky. The trail here is lined on both sides by a thick carpet of ferns. A short way down this stretch of trail, I found part of our group standing by a rhododendron bush that was in full bloom. Knowing how excited my friend Dori would be when she saw this, I just had to wait for her to arrive so that I could see her reaction. She and Tom had planned the timing of the hike carefully in hopes of seeing the rhododendron blooms. Her reaction did not disappoint. It was well worth the hike just to see the joy on her face and the awe in her voice when she spotted the blooms.

After taking time to photograph the beautiful blossoms, we continued down the trail to the point where riders must leave their horses before continuing to the Sand Cave. Hitching posts are available here to tie up your horse. At this point, the trail becomes even more rugged, with several sets of very tall steps to maneuver down. Of course, the journey down comes with the realization that one must make the journey back up. But, soon. we reached the bottom, and suddenly the Sand Cave came into view.

We approached the cave along a shallow stream. This stream is fed by a 30 – 35 foot high waterfall that flows over the top of the sandstone “roof” of the cave. Skirting around the edge of the waterfall, we entered the cave at the lower left end.

Words and photographs cannot describe the beauty and magnitude of the Sand Cave. Rather than a traditional cave, it is actually a massive overhanging rock shelter of sandstone. Years of wind, water and ice erosion have created swirls and intricate designs in the many colors of sandstone on the ceiling and walls. The eroded sand lies deep on the cave floor, making it look like a beach without an ocean.

To fully comprehend the size of the cave you have to see people in it. It is 1.5 acres in size which is a little bigger than the size of a football field including the sidelines and end zones. It does not seem this big when you enter it, but with the deep, shifting sand and steep slope it can take several minutes to climb to the far end of the cave.

The cave has excellent acoustics, which made it a popular spot for church singings in the years before the Cumberland Gap National Park was created in 1959. In those days, the cave was accessible by road from the Kentucky side. Visitors also reportedly collected the colorful sand prior to the creation of the park, but that is now illegal.

After enjoying some lunch in the shade of the cave, I went back down to the waterfall. I had come prepared to enjoy the cool water by wearing swimwear under my hiking clothes. Did I say ‘cool’? I meant COLD! Refreshing. Rejuvenating. Bracing. Others joined in on the fun and we took turns taking photos and video of each other “bathing” in the natural shower.

After a lengthy visit at the Sand Cave, our group was ready to continue our hike up to the White Rocks overlook. This entails a tough climb back up the trail from Sand Cave to the hitching posts. From there, a trail leading to White Rocks splits off from the trail we came down earlier. This is a gentle uphill climb for about 1/2 mile to another set of hitching posts.

White Rocks is  a series of massive sandstone cliffs facing the Virginia side of the park. White quartzite pebbles embedded in the sandstone give these cliffs a reflective shine. This makes the White Rocks visible for many miles, making it a landmark for visitors traveling west along the Wilderness Road during the 19th century. When they saw the White Rocks, they knew they were one day’s travel away from the Cumberland Gap.

The views from atop the White Rocks are breathtaking. There are many photo ops here, including a popular outcropping where one can stand to have their photo taken. This spot makes for quite the dramatic photo as you are towering over the Powell Valley. Mountain Laurel and Rhododendron both were beginning to bloom here.

Eventually, it was time to begin our descent back to the trail head where we started. From White Rocks, there is a “shortcut” trail that is quite steep but cuts out some of the distance of the hike. We made a much speedier trip down than our earlier ascent, which meant that most of the group (me included) missed the opportunity to see a yellow lady slipper in bloom. I arrived back at the car weary, but basking in the glow of a great adventure with good friends. 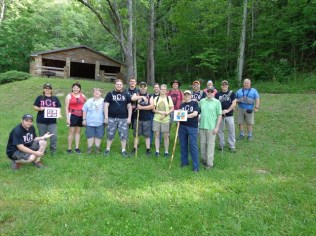 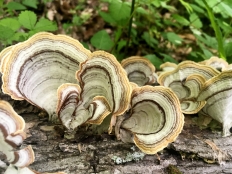 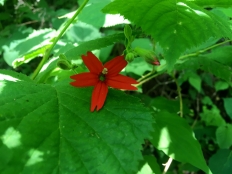 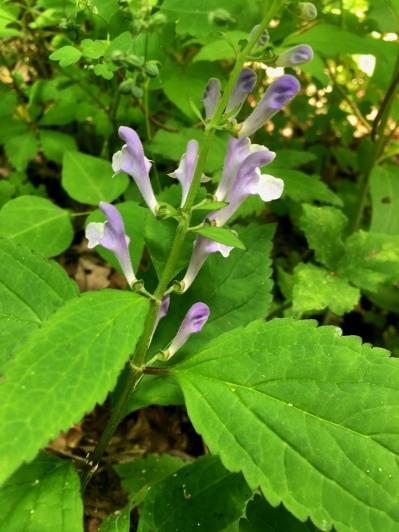 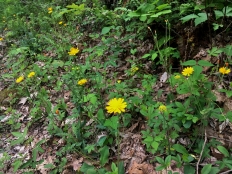 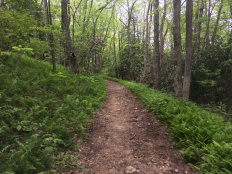 Our first Rhododendron of the year

Walter in the Sand Cave 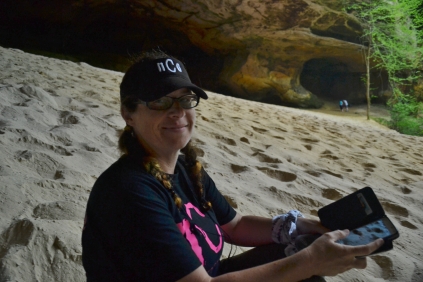 Looking out from the Sand Cave 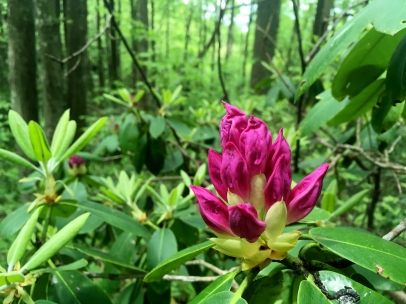 Lake Bum – King of the world 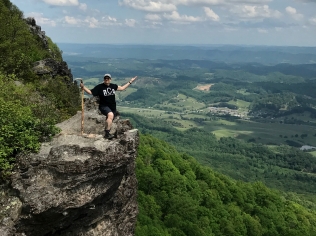 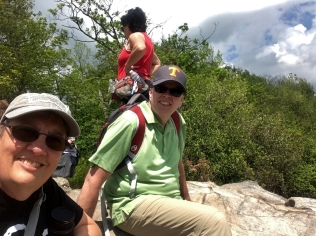 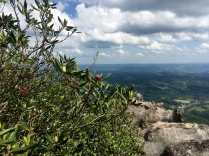 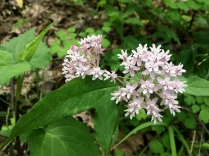