Rob (LakeBum37663) closed out 2016 with a hike at Bays Mountain Park. We hiked up Bays Ridge, down to Front Hollow, and up to Lakeside Trail for my stick’s inaugural journey. You can see the trail map here.  This was a new route for me, and allowed me to find several caches that I had not yet found.

The route up the Bays Ridge Road is a steady climb for two miles with an elevation gain of about 210 feet. Stopping for caches along the way makes the trip much more enjoyable. Once we reached the highest point, we then had a very steep descent of 480 feet in less than a half mile. We then faced another long steady ascent for the first mile and a half up Front Hollow Road, and then a steep half mile climb to reach Lakeside Trail. Once you have made it back to the dam, you think you are home free, but it seems that last little walk up to the parking lot is the worst part of the trip.

LakeBum carried with him some containers so that he could place new caches along the Bays Ridge route. He had one spot in mind when we started out, where he hid a cache he named Bays Ridge Bang-Bang. Near the cache location is a sign warning hikers to not leave the trail and travel downhill because there is a rifle range at the bottom of the mountain. In fact, we could hear gunshots the whole day, which makes one a tad nervous. After all, wayward shots can travel quite far!

A highlight of this trip was discovering swag left by BackwoodsAng in one of the caches. It was a slice that he had cut off of my hiking stick when adjusting the length to fit me. I recognized the pattern of the rings in it, and he later confirmed that it was indeed a piece of my stick. I thought it was very appropriate that I found this on my stick’s inaugural hike. 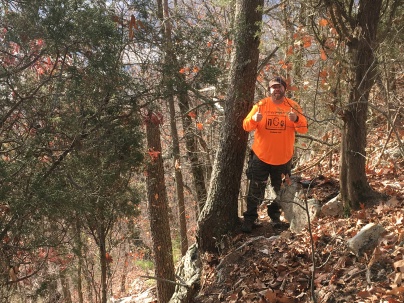 Sun trying to break through the clouds 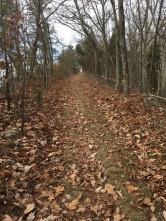 Fern garden on a rock 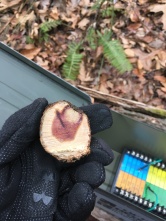 A piece of my hiking stick that Ang left as swag in a cache.

Map of our route.