Since we returned from our cruise, we had enjoyed beautiful weather all week. When the weekend came, the ugly weather rolled in with it. Heavy rain and thunderstorms were forecast for both Saturday and Sunday.

Saturday morning, Deban and I attended a geocaching event held by our friend Rudekoolaid (Angela). It was a breakfast event at a chain restaurant specializing in biscuits. During that event, Angela mentioned that she had a brand new cache that had published while I was out of town and encouraged me to go find it.

Deban and I had plans for the Saturday afternoon and evening, so I put it on the back burner. When I got up on Sunday and looked at the weather, it appeared that I might have a small window of opportunity to visit the cache that afternoon. I decided to take my bike along to speed up the process, because it would be two miles to the cache location from the trail head.

I loaded up the BAT-bike, and headed to Hawkins County. Phipps Bend is the site of a nuclear power plant that never was. TVA began building it in 1977 but announced in 1981 that they were deferring completion. The project has never been restarted. Now, much of the land in this bend of the Holston River is an industrial park with a hiking/biking trail around the perimeter.

A light rain fell as I drove to Phipps Bend. I had brought along a rain jacket and was wearing light-weight, quick-drying pants so wasn’t too concerned about the rain. What did give me pause was the threat of a thunderstorm rolling in while I was on the trail, but the radar did not show one headed that way.

As I pulled in to the parking area, I spotted a large snapping turtle crossing the gravel entrance. I stopped to get out and take his picture, and encourage him to continue moving toward the grass so that he would not get run over.

There was still a light rain falling as I unloaded my bike and prepared to ride. However, it was 68 degrees, so the rain did not bother me. I put on my rain jacket and bike helmet, pulled my hood up, and was on my way. On my back was my light-weight Venture Pal day pack with Signal the Frog tucked in the side pocket.

The trail is a one-lane gravel road with grass between the two gravel tracks. I weaved back and forth from one track to the other, avoiding water puddles and horse manure. The woods to my left were flooded, and I wondered if the cache Rob and I had found there on our last visit was under water. I didn’t stop to check, choosing to keep pedaling toward my goal. 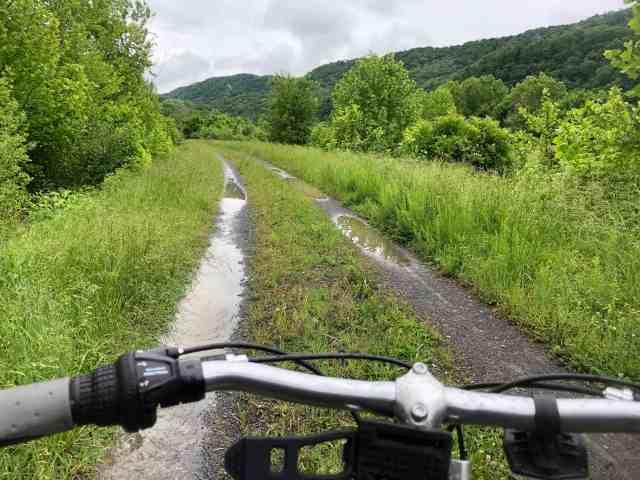 This part of the trail is mostly level, making it an easy ride. I enjoyed yellow-flag iris blooming in the marshy areas along the trail. I could hear, but not see, various small birds and larger waterfowl in the trees. A couple of frisky squirrels scampered across the road in front of me.

I paused as the trail bends toward the west to take some closeup photos of the iris, and some with the cooling pond that TVA built in the background. The rain continued to fall and my pants were quite wet, but I wasn’t uncomfortable. It just served to help me stay cool during the exertion of riding.

I watched along the way for the spot where I had hidden a cache on our last trip, but didn’t see the sign where it is located. After about 20 minutes, I arrived at the road leading to the cache location. This was the only part of my ride that was uphill, and I only had to pedal about 400 feet before stopping to look for the cache. It was raining harder by then, which makes geocaching with a smart phone very difficult. The raindrops hitting the touchscreen, and wet fingers make it hard to select, type, or even open the phone at times. I struggled with it and may have even cursed a little as I tried to open my app so I could navigate to the cache.

I finally found it, and was happy to see a fresh log sheet inside, showing that I was first to find. I picked up a travel bug that was inside, signed the log sheet and headed back to my bike.

It had finally stopped raining, so I decided to ride on around the trail another mile to look for a cache I had passed up during the last visit. It was hidden inside a metal culvert under the road. When we were here last December, the water running through the culvert was very deep and the weather was too cold to wade in and get wet. Since I was already wet today, I decided that I would go in and get it.

I had brought along water shoes, but in the interest of time decided to just wade in wearing my boots. There were an older pair, and I didn’t mind getting them wet inside and out. The water was a little more than ankle deep, but wasn’t too cold. I headed into the culvert and made my way toward the other end. When I looked in here on my last trip, I had been able to see the rectangular magnetic key holder attached to the roof of the culvert near the far end.

I couldn’t see it today, and by the time I had made my way to the end could tell that it was indeed missing. Based on the amount of grass and other debris clinging to the ceiling of the culvert, a great deal of water had flowed through here during the rainy weather we had earlier this year. The cache is probably far downstream now, so I had to log a DNF. I did not have a replacement available in my backpack.

I emerged from the culvert and got back on my bike. I started riding back toward the trailhead, but with each stroke of the pedals could feel water sloshing inside my boots. The funny thing about waterproof boots is, while they keep water out, if you get in water over the top of the boots and water gets inside, the waterproofing KEEPS it inside. I knew there was a picnic pavilion just off the path, so I rode up to it and stopped where I could sit down, take off my boots and empty them of water, and then replace them.

Back on the trail I made good time. The clouds were gathering again, and I was hoping that I could make it back before the rain returned. Since I was soaked from head to toe by this time, I no longer tried to avoid the mud puddles, but still swerved to miss the occasional horse apples.

Once again, I watched for the sign where I had hidden my cache. I stopped at one point to look at my phone and realized that I had passed it once again. I turned around and went back a few hundred feet, and finally spotted the sign hidden amongst the foliage.

I climbed off my bike and tried to get close enough to the sign to check on the cache. It was now surrounded by thorn bushes and poison ivy. I carefully picked my way closer and soon found myself thoroughly ensnared by the thorns. I could see the cache container, but could not reach it. Any effort to do so resulted in thorns attacking me from every direction. I decided that I was close enough to determine the cache was still in play, and carefully extricated myself. I would later write in my ‘owner maintenance’ log that I recommended waiting until winter to search for it.

Back on my bike I continued riding toward my truck. I spotted something on the ground and stopped to find that it was a horseshoe, complete with the nails used to attach it to the hoof. Apparently one of the horses that had left all the manure behind had thrown it during their trip. I hope it did not have a painful journey back home. I picked up the horseshoe and attached it to the rack on the back of my bike for good luck.

I stopped again at the cooling pond to take a photo. It was a much different view than I had seen earlier. Without the rain falling on the water it was now reflecting the beautiful sky. As I rode the last mile or so, I began to grow warm under my rain jacket, but didn’t want to stop and take it off.

I arrived back at my truck a little over an hour and a half from when I had started. I took off my rain jacket, enjoying the cool air on my arms. My pants were still a bit damp, but wettest was my feet. I dug a dry pair of socks and boots out from under the back seat and it felt good to put them on. I had just loaded up my bike and pulled out of the parking lot when the skies opened up and it began to pour. Perfect timing!