My mother, Nelle Marable Barton, was born March 22, 1921. Today would have been her 98th birthday. As of today, she has celebrated 20 birthdays in heaven.

Last week, my oldest sister Alice suggested that we plan a memorial hike for Mama’s birthday. There are five of us: (in order of birth) Alice, Wil, Charlie, Mary Lou and I. I don’t usually get to hike on Friday, being the only one of the five sibs that isn’t retired. However, since I worked Saturday and Sunday last weekend, I took a comp day and joined the fun.

We have planned memorial hikes for our parents before, but this was the first time that all five of us were able to be together for a hike, making it a truly special day. Three of my nieces also joined us, and two of them brought their children along.

I had to hit the road at 7:40 am in order to meet everyone at the Porters Creek Trail trailhead at 10:00. I had the longest drive, but had an audio book loaded on my phone to make the time go more quickly. I made one stop along the way; dashing into the WalMart in Newport to pick up an inexpensive cap since I had forgotten to bring one. I have to have a cap or a headband when I hike to absorb the massive amounts of sweat my head produces.

As I followed 321 through Cosby, I could see white on the highest mountains. I don’t know if it was snow or just frost, but it made for a pretty drive.

I arrived at the trailhead right on time. My sisters and some of their offspring arrived about the same time, but we had to wait on our brothers who were riding together. They arrived a few minutes later, everyone geared up, and we began the hike at 10:17 am. The photo at the top of the page was taken at the trail head.

Alice, her daughter Debbie, and I led the pack as we started up the trail. It was too early for many of the wildflowers that we typically see along this trail in spring. We did see some anemone near the beginning of the hike.

Before we had gone very far, word reached those of us in the front that Charlie had returned to his car. He had received notification on his phone that he had three voice mails, but he couldn’t retrieve them. Since his daughter is pregnant and due any day, he dashed back to his car and drove back toward the highway, looking for a signal so he could hear the messages.

The rest of us continued hiking. This is a great trek. The first mile is on a gravel road with a gentle uphill grade. It follows beautiful Porters Creek and is a very popular spring time trail for those who love wildflowers. We spotted some trillium that were getting ready to bloom, and a few purple and yellow violets. There were plenty of opportunities to take photos along the way, and I soon moved to the middle of the pack since I was stopping so often. 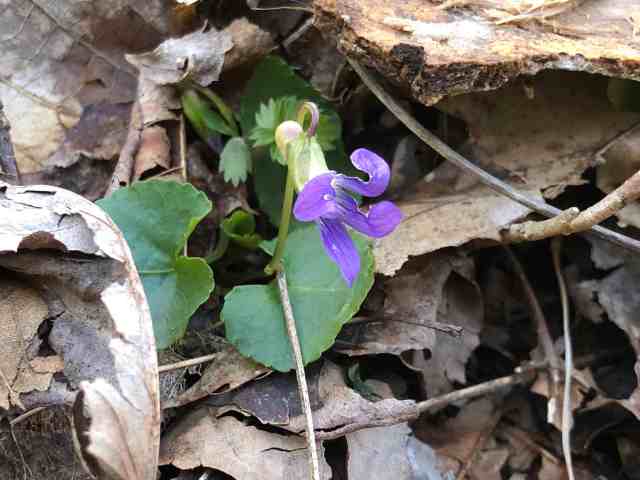 My great nephews sat on a vine “swing” for photos, so I had to join in on the fun. I was a little nervous when I sat down and heard a “crack” but the vine held.

When I had climbed back down to the trail, Wil asked me to pose by the rock wall that marks this as an old homestead. Someone spent a lot of time and carried a lot of rocks to build all of the walls here.

We passed a stone staircase, and laughed about the photo we had taken here in 2015. Four of the siblings had lined up on these steps, and after we returned home I photoshopped Charlie into the picture. Someone commented that we might have to do that again this year, since he had left to check the status of his new grandbaby. Wilbur had ridden with him, so I joked that he might have to walk home if Charlie had left for good.

All of us were carrying packs with snacks and drink except for my niece Leslie. She had the heaviest load of all – JAC. He seemed very content to ride on his mom’s back. 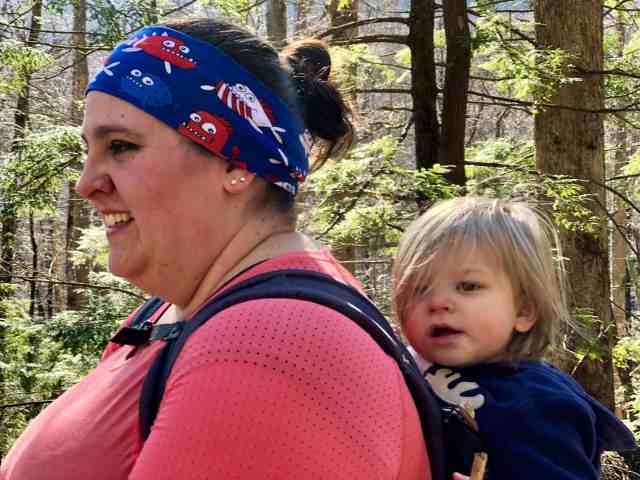 The second mile of the hike is along a well-defined foot path. We slowed along the first part of this section, carefully navigating over and around the many roots and rocks in the trail. Alice showed us the spot where she fell in 2016 and ended up with a black eye.

This trek has a couple of bridges to cross, including one that many call the “scary bridge.” It is a narrow, log footbridge and for years had only one handrail. Porters Creek rushes over and around huge boulders far below the bridge. The creek is quite wide at this point, making it a long bridge with a bend in the middle. That one handrail is on the downstream side of the bridge, and is angled out from the log you walk on. I always found it to be uncomfortable to try to hold the handrail walking across, because it is too low for me to reach without stretching. A few years ago, a second handrail was added on the upstream side, making the bridge a lot less scary. Stopping in the middle of the bridge allows you to get the best photos of Porters Creek.

Just past the bridge, we saw our first tiny blossom of fringed phacelia.

While we were stopped here, Charlie reappeared. When asked about the voice mails, he replied, “Champion Windows” in a disgusted tone of voice.

As we hiked further, we began to see a few more wildflowers. We had seen lots of trillium leaves along the way, but now began see some getting ready to bloom, and one lonely trillium that was bravely blooming early. 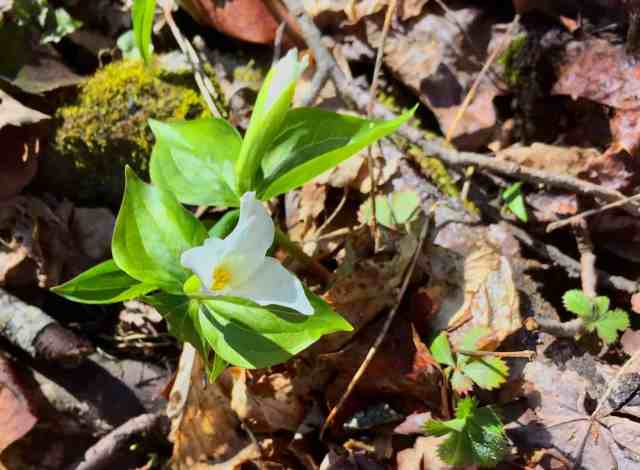 The giant fields of fringed phacelia were not in full bloom quite yet. I have visited this trail many times when it looks like there is snow on the forest floor because of the dense covering of phacelia. Today is was mostly green, with a bit of white sprinkled in. I spotted some star chickweed, and a nice little bit of dutchman’s breeches. I also saw what appeared to be toothwort getting ready to bloom, but I wasn’t able to get a good photo of it.

As we neared the waterfall, my niece Melanie spotted a huge hollow tree, and had to climb inside for a photo. 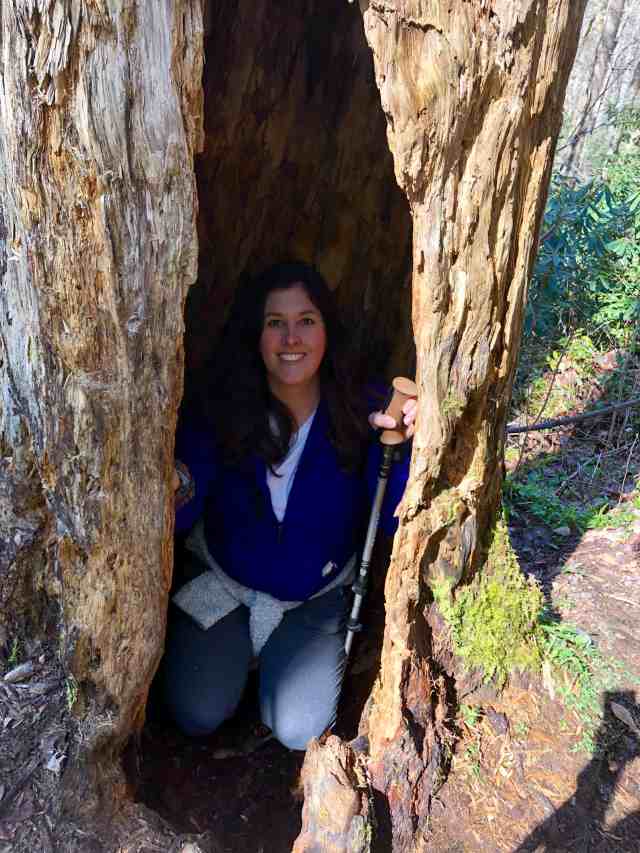 We reached Fern Branch Falls at a few minutes before noon. My stomach was rumbling, so I was happy to sit down and eat a peanut butter and jelly sandwich. My great nephews Tristan and Tyson were the only ones adventuresome enough to go up to the base of the falls. I told the group that last year I had climbed to the top with my friend Mary, but no one seemed interested in making that trek with me today. I happily ate my snack and enjoyed the view from the bottom.

I had warmed up enough to sweat on the hike, but it was cooler near the falls. We were sitting in the shade and there was a breeze, so we did not linger too long. The five sibs gathered for a photo op before Alice and Debbie headed down the trail ahead of the rest of the group.

On the way back down, there appeared to be a little more phacelia blooming. In another week or so, there should be a beautiful white carpet here.

After we had crossed the scary bridge, we noticed a couple of ladies looking at something next to the trail. When I paused to see what it was, they pointed to a pile of snake bones!

Once we were back on the gravel road, the going was move faster. It is all downhill from this point on, and with a wide, smooth road one doesn’t have to be so concerned about their footing.

Alice and Debbie were waiting for us at the stone staircase, and we paused here for a sibling photo. Of course, we had to arrange ourselves in birth order. Since Alice was already sitting at the bottom, I climbed to the top, and the other three filled in appropriately.

Soon, we were back at the parking lot and the hike was over. Someone mentioned meeting at McAllister’s in Pigeon Forge to eat. It was a bit out of my way, but since I wasn’t ready to say goodbye to everyone I agreed. We had a nice meal there, and finally went our separate ways.

The drive home took a bit longer with all of the Pigeon Forge traffic. I had to stop for gasoline, and then a second time to climb in the back seat of my truck for a power nap. I had had a short night’s sleep, and was sleepy after a nice hike in the woods. Fortunately, the rest and a hefty dose of caffeine and chocolate did the trick. I made it home nearly 12 hours after I had left that morning.

It was a real blessing to be able to spend the day with my family, honoring the woman who brought us all into this world. I miss you, Mama!