LakeBum (Rob) texted me on Friday to ask if I wanted to paddle on the Watauga River on Saturday. I told him I would love to, but needed to be home by 3:00. Deban and I had plans to meet friends in Abingdon that night for dinner and to see Steel Magnolias at the Barter Theatre.

He said the plan was to meet our friends Berta and Doreen at Lovers Lane at 10:00 am. He suggested that I meet him at the take out – Wagner Road – at 9:30. Richard would also be meeting us there. We could leave my truck and Richard’s there. When the trip ended, I could go straight home and Richard could shuttle Rob and Berta back to their vehicles while Doreen stayed with their boats. He said it might be tight, but it should work.

When I met him the next morning, I told him that I had decided I could have time to get ready for the evening’s outing as long as I got home by 3:30. When we met up with the rest of the group, I let them know that I needed to be at the takeout by 3:00 so that I could make it home in time.

We put our boats in the water, and headed downstream, enjoying another beautiful summer day. After a few warm-up rapids, we reached the one that Rob always dreads – Sycamore Shoals. He claims to have capsized here a couple of times, but I’ve never been around to see that happen.

We all made it through safely, although I bounced off a couple of rocks, and Doreen got hung up on one. Rob was happy to have conquered the shoals once again, and we paddled on.

Further down stream was my favorite part of this stretch of river, the falls. This five foot drop stretches diagonally across the river. There is one narrow spot where you can safely navigate the falls. I paddled ahead of everyone, making the drop first so that I could take photos and video of everyone else.

I hit the sweet spot and glided over with ease. I thought I was home free, but had forgotten that there is a cross current below that gives me problems every time. I hit it, and nearly capsized, but righted myself at the last second. I turned, and got into position at the bottom of the falls, and then signaled that I was ready for the others to come across.

It is always fun to watch the long canoes navigate the falls. They seem to hang in the air just before making the plunge. Rob, Richard and then Berta all made the plunge. As Doreen approached, I remembered her misadventure last year when she got stuck at the top. Once again, her boat was just a bit too far to the left, and she got hung up on the rock for a moment. However, she soon freed herself and made it over without a problem.

Doreen mentioned that her saddle was lose, and that she didn’t feel that she had good control of the boat. Rob offered to take it home with him after the trip and fix that for her. He would then bring the boat back to her when we met up again in a couple of weeks. That is the kind of guy he is – always ready and willing to help out his friends.

Just downstream from the falls, we passed the location of Rob and Kara’s upcoming nuptials. They are planning a very small gathering of family only, so Doreen and I plotted how we could crash the wedding by just happening to paddle by as it was taking place. Doreen even said that she would wear her dress under her paddling clothes. I guess I could wear a skirt. My kayak spray skirt that is. I suggested that we could sing for them as we paddled by.

Since she is French-Canadian, I suggested that Doreen teach me a French love song that we could sing for them. She began crooning in French, but it was Greek to me. Several times since that day, she has asked me if I’ve been practicing our song.

We soon arrived at the Blevins Road boat ramp, and stopped to have lunch. There is a picnic table nearby, which was a welcome change. We are usually eating while perched on rocks or fallen trees.

After eating, we paddled on downstream, enjoying the fun rapids this stretch of river offers. I paddled near the tiny island where I have a cache hidden to check on it. It has gone missing twice, and I had replaced the ammo can with a small bison tube hanging in a tree during our last trip. I could see it still hanging there, and was glad to not have to replace it again.

High in a tree we spied a vulture, watching us paddle by. I tried to get a photo, but he was so high up it was difficult to get a good one.

We pulled in to another favorite spot, a large overhanging rock formation that creates a cave. There is always water dripping from the rocks, and it is cool and shady inside. Richard pointed out a small outcropping in the rock about 30 feet overhead. It was covered in vegetation as if a tiny rock garden had been planted there. I had never noticed this before, and it intrigued me. The water dripping off of it created a tiny waterfall that Richard paddled under to cool off even more. Once again, it was too far away to get a good photograph, but I enjoyed the sight in real time.

We stopped at a sandy beach a little further downstream, where we often stop to eat when paddling the shorter Blevins Road to Wagner Road stretch. I wandered off behind the trees to use the restroom, and along the way discovered a cow’s skull in the high grass. I grabbed it on my way back out because I knew that Rob would like it. He was excited by the find, and tied it to the back of his boat to take it home. I told him that I had seen the rest of the beast’s skeleton nearby, but he was content with the skull.

Eventually, we reached another favorite rapid that we call Goat Rapid. Once again I went first so that I could capture video and photos of the others. After this rapid is the always-enjoyable Wave Train, a section with one wave after another providing a rollercoaster type ride.

Soon, we were navigating the last rapid of the day, and the two bridges signaling the end of our journey came into view. The boat ramp lies between the railroad bridge and the highway bridge. As the nose of my boat touched the ramp, I looked at my watch. 3:00 pm. Perfect timing. I made it home with plenty of time to spare, and then went on to enjoy a fun evening with the girls. 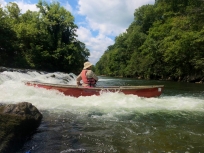 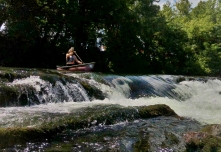