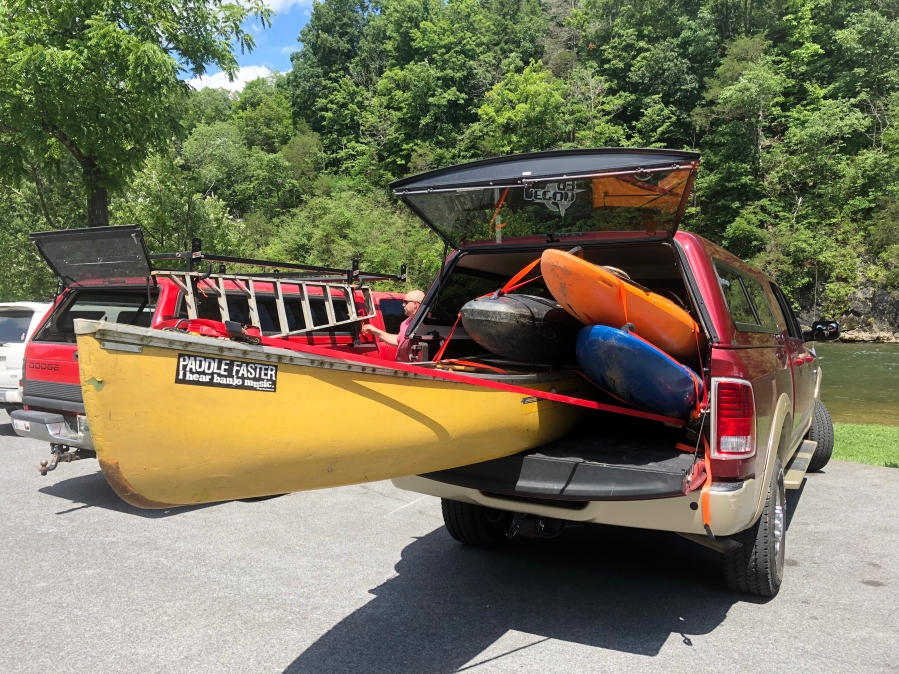 I met up with LakeBum (Rob), porknbeans (Jane), Coach_L42 (Thomas), Beauxeault (Jeff) and skyguy777 (Britt) to paddle the Watauga River. Poor Rob was the only canoeist, while the rest of us were paddling kayaks. We were a colorful bunch with red, blue, green, orange and yellow boats. I was paddling Huck as usual, my blue Liquid Logic Remix XP9.

Today’s run was at lower water levels, so it was a leisurely paddle. Since some in our group had not found all of the caches along this stretch of river, we made a few stops along the way. I had found all of them, but was content to just go along for the ride.

Just past our launch point at the Blevins Road boat ramp, we saw a fisherman on a dock with a very large striper that he had just caught. I asked if I could take a photo of it and chatted with him. He said it weighed 26 pounds, and that he had just had a bigger fish that broke his line a few minutes before.

Thomas was paddling a new boat, and still getting used to it. He made it through the first set of rapids easily, but soon after we heard a splash behind us and turned to see that he had overturned in a calm section of the river. He said he was trying to adjust his position in his seat and got off balance. We told him this was his baptism and now he didn’t have to worry about capsizing again.

The weather was beautiful, with blue skies and fluffy clouds. It was warm enough to be comfortable in shorts and short sleeves, but not too hot.

One of the caches we stopped at was in a shallow cave well above the water line. Jeff, Britt and Thomas had not yet logged it. It is not an easy one to reach because there is not a good place exit your boat. Jeff did a remarkable job of standing in his kayak, turning around, hoisting himself onto the rocks, and then climbing up to the cave. After logging the cache, he managed to get back in his boat without capsizing. Very impressive!

It was Thomas’s turn to exit his boat when we reached the next cache location. He managed to do that and navigate the slippery rocks to climb up to the cache without any problems.

I stopped off on a tiny island where I hid a cache two years ago. The ammo can I had placed here was missing last year and I had to replace it. It was missing once again, so I replaced it with a small bison tube that will not be as tempting or visible to muggles.

Just downstream from the tiny island we stopped at a beach to have our lunch break. After eating my pimento cheese sandwich I waded upstream to another island to check on a second ammo can I had replaced last year. Thankfully, it was still in place. It was covered in mud as if the water had washed over it sometime during the last year, but it was still perfectly dry inside.

After we resumed our trip, we paddled through some of the more fun rapids on this stretch of the river. Everyone made it through with no problems and with smiles on their faces.

We stopped again at the Wagner Road boat ramp so that some of our group could stretch their legs, and then moved on for the last section of our trip. After passing under the Watauga Road bridge, we were thrilled to see that Quarry Falls (aka Rainbow Falls) was flowing. The last two times I’ve paddled this section, they have not been flowing so it was like greeting a long lost friend.

We took turns taking pictures of each other in front of the falls, and then some of us were bold enough to paddle under the pounding water. This is always an exhilarating experience for me. I paddled deep into the spray, which can be somewhat terrifying when the force of the water begins to push you toward the rocks. After giving me a good massage, the falls spit me back out into the sunshine. The water flowing over them is warm and a bit gritty as it comes from the quarry above the towering cliffs. It feels great, and is worth finishing the trip soaking wet.

After we had all had our fun with the falls, we paddled on down the river toward our take out point. Along the way, I spotted a tall, rotten tree towering above the others on the shore. I told Jane that it looked like a great place for a geocache and paddled over to look at it more closely. She followed me, but the others in our group were far ahead of us and didn’t know what we were up to.

The tree had lost a huge branch that hung out over the river, and I used it to climb up onto the high bank. I hid my geocache, obtained the GPS coordinates for it, and then tried to decide how to get back down to my boat. I started walking out onto the limb I had used to climb up, got a few steps out on to it, and then froze. I suddenly couldn’t make myself go forward or back to shore. I simply stood there with my knees shaking, trying to use my paddle for balance as a tight rope walker would.

Jane suggested that I try to sit down and scoot across, but when I tried to do that I lost my balance and nearly fell. It wouldn’t have been a long fall, and there was water below me, but I really didn’t want that to happen. I regained my balance and continued to stand there, frozen in place and weighing my options.

I could jump, but the water was not very deep and I knew I would hit bottom and possibly break some vital appendage. I could try to back up, but that seemed impossible. Even walking forward was terrifying by that point as I continued to wobble and sway. My phone rang, and I ignored it, not feeling like talking at that moment.

At some point, Jane decided to pull out her phone to video my plight. I heard her say, “Antbedy’s stuck!” This gave me the impetus I needed to bend my knees until I could drop down straddling the limb, and then climb down. I certainly didn’t want a viral video on the world wide web of me stuck on a limb.

I climbed back into Huck and we paddled on to join the others who were waiting a short distance downstream.

We finished the trip without further incident. A man was fishing at our take out point, and we had to maneuver around him and his truck to pull our boats out of the water. We loaded Rob’s, Jane’s, Thomas’s and my boats into my truck for the shuttle back to Blevins Road. Jeff and Britt had parked at the take out and so we said our goodbyes there.

Jane and I had enjoyed the day so much, we made plans for another outing the next day. Stay tuned for a post about that adventure, coming soon. 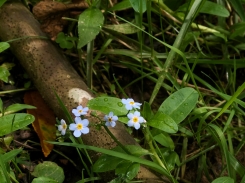 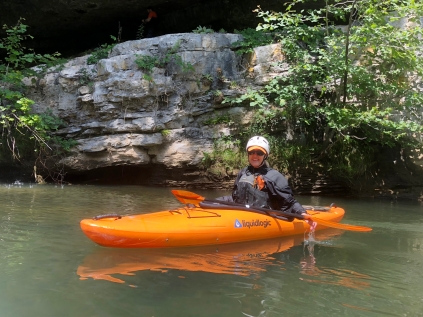 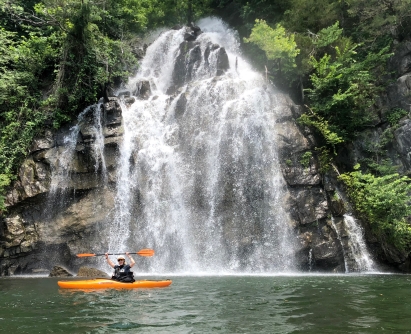