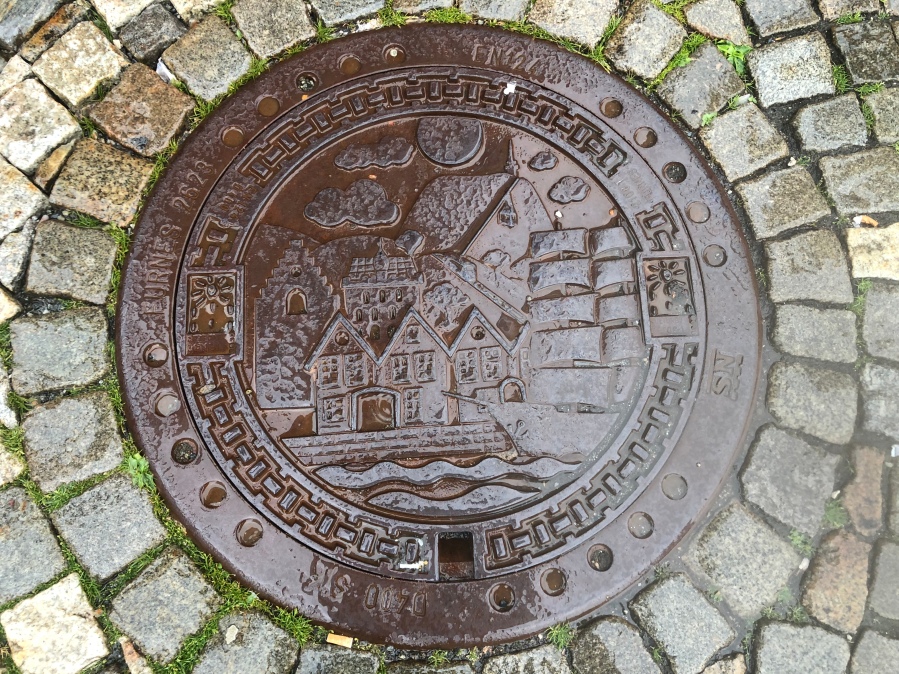 Up until this stop, we had enjoyed atypical weather for Norway. Most of our days had been mild and either partly cloudy or sunny. Today that all changed. Today we had “real” Norwegian weather. Cool temperatures, windy, and sideways rain.

We headed out after breakfast to explore the town a little and find some geocaches. We felt prepared with rain jackets. I had even sprayed our boots with weather proofing before we left home. But, this sideways rain soaked us to the bone in no-time flat.

We gamely pressed on, making our way to the first cache on my list. It was a regular size and had 11 travel bugs listed in the inventory. I felt it would be a good place to trade out some of the trackables I had brought with me. My plan was to find it, go just a little further to log a virtual cache, and then circle back toward the ship logging additional caches on the return trip.

Getting to the first cache turned out to be harder than it appeared on the map. This part of Bergen has several row houses – narrow but long wooden houses facing the water. Between them are passageways or pedestrian alleys along which are shops. I was looking on the map and had chosen the closest passage to the cache, but when I arrived in front of it, it was blocked off. We backtracked to the previous one and followed it to the back of the buildings, only to find a locked gate. We went back to the street and to the alley before this one, and were finally able to reach the courtyard holding the cache. Deban sat in a covered area while I went off in search of the cache. I found it easily, retrieved it, and carried it to a protected place where I could open it without soaking the contents. I was disappointed to find there were no TBs inside, but went ahead and dropped off one that wanted to stay in Europe.

I returned to Deban, and we set our sights on a nearby virtual cache. It is at the lower station for the funicular that will carry you to the top of the mountain overlooking Bergen. I would have liked to have ridden it, but knew that we would not be able to see anything because of the heavy rain and fog. I took the required photo of the station, and then we moved on in search of some more caches.

Along the way we stopped off to shop in a store that was three stories high, long and narrow in one of those row houses. Deban found a gift to take home to her mom and I looked at Christmas ornaments but did not find any I liked.

I found a quick traditional cache in a lamp post, and then crossed the street to a church where there was an EarthCache. I needed to collect information about the types of rocks used in the construction of the church, so quickly took photos of the areas of the building referenced on the cache page and moved on. I planned to study the cache page and the photos once I was back on the ship, and prepare my answers that way.

We stopped off for me to log one more traditional and then started to make our way into a park where there was another EarthCache. I stopped in a tunnel to check the cache page where we could stay dry for a moment, and decided the requirements for logging it would be too complicated and time-consuming in the heavy rain. We made our way back out to the street and looked for one more cache on our way back to the ship. Unfortunately, we were on the wrong side of a high rock wall to find it, so moved on.

It was around this time that I mentioned to Deban that one of my boots seemed to have sprung a leak. She informed me that her boots had been leaking since we started because the soles were cracked. I laughed at that because had I known, I wouldn’t have taken time to waterproof them before our trip.

By the time we boarded the ship and made our way to our cabin, we were thoroughly drenched. Deban’s rain jacket had given up shedding water long before, and her t-shirt was as wet as the outside of her jacket. I had sprayed my jacket recently, and thought it was keeping me fairly dry. However, when I took it off, I saw that the sweatshirt I was wearing under it was wet in the arm pits and along the bottom side of each arm. I guess I didn’t spray those areas well enough. Our jeans were so saturated they weighed an extra 2 or 3 pounds. We were happy that we had paid for the unlimited laundry service. We hung everything up to drip dry for a few hours, and then bagged it up that evening to send to the ship’s laundry.

After dinner, we enjoyed yet another great show by comedienne and musician Lisa Koch. By this time, the ship had left port, and the captain had told us to expect rough seas throughout the evening and night. The ship was indeed bouncing around a good bit, but Lisa gamely made it through her entire show by bracing herself against a stool.

At 10:00 we had another show on the schedule, this one by Barbara Higbie, one of my favorite musicians. By the time her show started, the seas were very rough with 30 foot swells. Barbara managed to make it through several songs, and had invited some of the other musicians on stage to join her. The drummer who joined her made it through one song before she had to beat a hasty retreat. Cris Williamson and Lisa Koch were still on stage with Barbara when she announced that they would do one more song and cut the set a little short. While preparing for that last number, Cris discovered that draping face first over her stool with her head down helped with the queasiness, and before we knew it all three of them were trying it. I wasn’t quite quick enough with my camera to capture all of them, but did get a photo of Cris and Lisa in this position.

We made it back to our cabin, feeling like pin balls bouncing around in the hallway and went to bed. There were times during the night that we felt like we were levitating over the bed as the ship plunged over the back side of waves. Fortunately, neither of us are prone to sea-sickness and survived the storm with no problems. The next morning dawned with clearer skies and calmer seas.